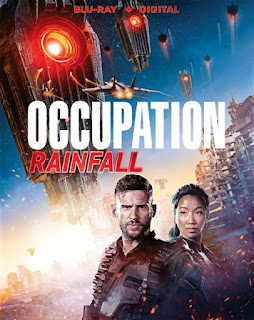 This is a sequel to 2018’s Occupation, an Australian sci-fi film depicting an alien invasion and the rag-tag group of fighters who form a resistance movement. Though not particularly original - nor especially memorable - it was entertaining enough if expectations were kept in-check. One also had to admire the ambition behind it. Considering the limited budget, the film was brimming with confidence, with an open-ended coda that optimistically assured us the fight wasn’t over.

Sure enough, it ain’t. And I’ve got news for you, kids...the fight ain’t over here, either.

But you really need to see the first film before diving into this one, since it unfolds on the presumption that viewers are well-versed with what’s already transpired and every major character (human or otherwise). Aside from a very brief prologue, there’s no attempt to bring newcomers up-to-speed. Even having reviewed the original (three years ago), I’d forgotten most of it because nothing left a lasting impression.

Occupation: Rainfall hits the ground running with a chaotic battle being waged in the air and on the ground. It's immediately obvious the film has a much larger budget than it’s comparatively quaint predecessor. Everything’s bigger, faster and louder, with special effects that run the gamut from spectacular to silly. Though it feels like we’re joining mid-story, a plot of its own begins to unfold, with human fighters teaming with a few of the friendlier ‘Greys’ (slang term for the aliens) to locate some kind of alien object called Rainfall, which could wipe out the rest of  humankind. Meanwhile, resistance leader Amelia’s (Jet Tranter) efforts to end the conflict diplomatically are being thwarted by the army’s more gung-ho approach, spearheaded by Commander Hayes (Daniel Gillies). Not a single aspect of the narrative is original or groundbreaking, but it's enjoyable in the moment.

Occupation: Rainfall does include some welcome bits of comic relief largely absent from the first film, most notably the antagonistic friendship between American satellite analyst Bud Miller (Ken Jeong) and laid-back alien partner “Steve” (voiced by Jason Isaacs). Similarly, the relationship between cynical soldier Matt Williams (Dan Ewing) and “Gary” (voiced by Lawrence Makoare) has a few amusing moments reminiscent of Enemy Mine or Alien Nation. Elsewhere, though, little effort is made to flesh anyone out. They’re either completely virtuous or irredeemably evil. And aside from the intentionally humorous moments, much of the dialogue is almost laughably grandiose.

Like the first film, Occupation: Rainfall earns zero points for originality and goes on a bit too long, but is certainly watchable. It’s slickly-made, has lots of flash and mostly moves at a brisk pace. However, be aware that the film comes to a remarkably unsatisfying conclusion where nothing is actually resolved. Only at the end are we informed by a title card that this is actually Rainfall, Chapter One. The film is an enjoyable enough time killer, but hardly engaging enough to justify a cliffhanger ending.

“SYDNEY ESCAPE” - A key action sequence is intercut with orchestral scoring sessions in the studio.