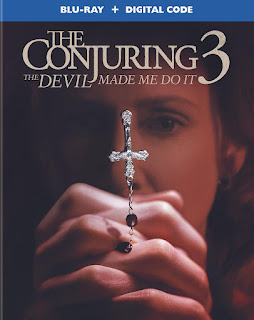 Review by Joesy, the Sudden Cat🙀

One reason The Conjuring series is unique among modern horror franchises is that the only connecting tissue is the two main characters, Ed & Lorraine Warren. Whether you buy into their schtick or not, the couple’s history of wild supernatural encounters means we aren't being fed the same plot over and over again. Nor will there ever be a shortage of new stories, even if the number of sequels ends up running into the double digits.

Another reason is none of them feel like cynical cash-grabs. The films are genuine attempts to terrify the audience through atmosphere, the ominous implications of the stories and well-timed jump scares, as opposed to simply thrilling them with violent spectacle. Think about it...the first film managed to scare the hell out of people with a body count of zero. And as played by Patrick Wilson & Vera Farmiga, the Warrens display a high-minded wholesomeness that’s not-only endearing, we seldom question their sincerity. If not for the demonic premises, these could (almost) pass as family films.

The Conjuring 3 takes a slightly different path than its predecessors, adding mystery and detective story elements to the narrative. During an exorcism overseen by the Warrens, Arne Johnson (Ruairi O’Connor) saves his girlfriend’s young brother from possession by inviting the demon into his own body. Later, he stabs a man 22 times but has no memory of doing it. When Lorraine discovers a deliberately-placed demonic totem underneath the house where Arne lived, the two are convinced he was possessed, therefore not responsible.

In something of a narrative departure, the middle act has the Warrens seeking evidence to support a ‘not guilty’ plea. Their search leads to a recent missing persons case, where they find another totem in the home of a girl who killed her best friend before taking her own life. They consult a retired priest, who ominously informs them a cult called Disciples of the Ram use the totems to curse others, demonstrating their allegiance to Satan. Once possessed, the victim kills someone, then takes their own life shortly afterwards. Now the Warrens need to find and stop the unknown occultist before they complete the ritual with a third curse. This leads to a lively, tension-filled confrontation during the final act, where not-only is the occultist revealed, so is the third victim.

Though less overtly-scary than the first two films - mainly because of our utter certainty the Warrens will prevail - The Conjuring 3 still manages to maintain an ominous tone. The story itself isn’t quite as engaging, but director Michael Chaves (taking the chair for James Wan this time around) keeps characters central to the narrative, a vital component somewhat lacking in his first film, The Curse of La Llorona (one of the dull spin-offs of the Conjuring Universe). And once again, the emphasis is on atmosphere and tension rather than gratuitous shocks (though I still jumped out of my seat a time or two).

Ultimately, it’s fun to revisit the Warrens’ escapades every couple of years, whether we actually believe them or not. They haven’t changed a whit since the first film, seriously dedicated to their profession and each other. And aside from having a bit more of an investigative focus, The Conjuring 3 is another reliably creepy entry in the franchise.

FEATURETTES - “By Reason of Demonic Possession” (The event that inspired the film; includes an interview with the real Arne Johnson); “The Occultist” (a look the the film’s antagonist, including an interview with the actor who plays her, Eugenie Bondurant); “Exorcism of Fear” (The making of the opening scene).

DC HORROR PRESENTS THE CONJURING: THE LOVER #1 - The best of the bonus features, this is a video comic featuring two short horror tales. Includes some hilarious faux-ads between the stories.