THOSE WHO WISH ME DEAD: Leave Your Scrutiny at the Door 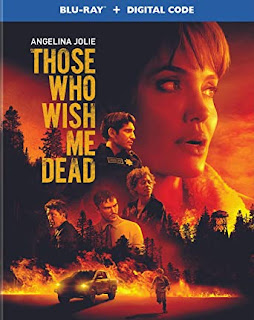 While not entirely original, Those Who Wish Me Dead is a fast-paced, entertaining action flick, but it sometimes requires some suspension of disbelief.

Angelina Jolie plays Hannah, a Montana smoke jumper suffering from PTSD after being unable to rescue some children during a forest fire a year earlier. Though still respected by her crew - as well as local sheriff/former flame Ethan (Jon Bernthal) - she’s been regulated to manning a lookout tower. Meanwhile, Owen (Jake Weber) is a forensic accountant who uncovers information that could incriminate a lot of dangerous, powerful people. With son Connor (Finn Little) in-tow, he goes on the run, hoping to reach trusted old friend Ethan.

Owen and Connor are relentlessly pursued by Jack & Patrick (Aiden Gillen & Nicholas Hoult), two ruthless assassins hired to kill him and anyone else who might be privy to the Owen’s information (we witness their handiwork in one of the very first scenes, when they blow up a district attorney’s house). Though they manage to kill Owen, Connor escapes into the forest and eventually runs into Hannah, who earns his trust and vows to get him to safety. It’s a task made perilous after Jack starts a massive forest fire to distract local authorities while they hunt, which includes forcing Ethan to be their tracker by threatening to kill his pregnant wife, Allison (Medina Senghore), who’s more resourceful than they bargained for.

For Those Who Wish Me Dead incorporates some disaster movie elements, including its main character, your usual troubled hero overcoming a traumatic past to find redemption. Hence, she’s the least interesting character in the film (with Jolie merely serviceable in the role). However, Jack and Patrick make a great pair of antagonists. Sure, they’re hired thugs and suitably cold-blooded, but also afforded a surprising amount of screen time to establish their methods, determination and relationship with each other.

The film wisely eschews the details surrounding Owen's information, which is ultimately just a MacGuffin to spark its characters into action. Similarly, Connor is mostly a plot device for Hannah to overcome her personal conflict (though we genuinely like the kid). The chase is what matters here, and for the most part, the film delivers a lot of gritty action punctuated by impressive special effects. Still, credibility is occasionally stretched to the limit, such as a ridiculous scene where Hannah & Connor are attempting to escape lightning that seems to be literally chasing them across a field. And for someone still reeling from being unable to save kids in a previous fire, the moment when Hannah orders Connor to escape on his own through a raging inferno might have the viewer going, “Uh...what?”

But hey, Those Who Wish Me Dead ain’t a documentary and one shouldn’t let a little unwelcome scrutiny ruin the fun. If you’re able to accept being perfectly able to breathe in the middle of a blazing forest fire, the film is a fun spin on a familiar premise, with solid action, good performances and a couple of interesting bad guys.

FEATURETTE - “Making Those Who Wish Me Dead”