THE THING and My Creepy-Ass Dog 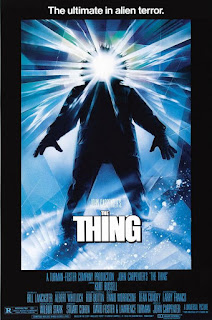 If you’re a horror fan – particularly an ‘80s horror fan – you probably hold John Carpenter’s The Thing in high regard, and understandably so. Though not very successful when first-released, it’s become deified over the years and is generally considered one the director’s best films. I’d go a step further to say he hasn’t made a truly great one since (though I’m open to arguments for They Live).

Because of the classic status it enjoys now, there have been a lot of explanations why The Thing flopped in 1982, the most common claim being that it was overshadowed by another film that summer featuring a decidedly friendlier extraterrestrial. Frankly, I think that explanation is bullshit. Does anybody seriously think The Thing was trying to nab the same family audience that loved E.T.? 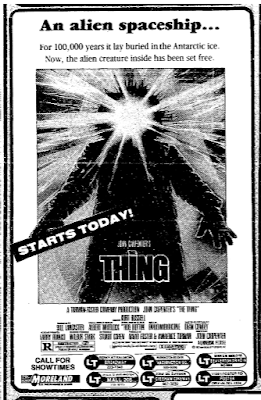 I think the seeds of The Thing’s box-office failure might have ironically been planted by John Carpenter himself back in 1978, when Michael Myers arrived to carve-up Haddonfield in Halloween. Afterwards, hardly a week went by without another masked killer being unleashed to relieve teenagers of their discretionary income, who were eager to see their own kind sliced-and-diced on the big screen. By 1982, the extraterrestrial terrors of Alien were a distant memory. With some classic exceptions, the most successful horror films of the decade featured young characters, simple plots and enough exposition to appease even the dumbest fucks in the theater.

The Thing has none of that...no masks, no sex (premarital or otherwise), no women, no killer’s backstory. Favoring dread to gratuitous jump-scares, the film is claustrophobic, gruesome and unpredictable. Relentlessly downbeat – nearly nihilistic - we suspect everyone’s doomed right from the get-go, through no fault of their own. Then the movie has the audacity to end ambiguously, its biggest question left unanswered. What chance did it have against the likes of Friday the 13th Part 3, which outgrossed it by $15 million? That Friday 3 also outgrossed Blade Runner is a strong indication that most folks buying tickets in 1982 preferred being spoon-fed.
Like Blade Runner, The Thing is a belated classic because it ultimately transcended its own decade. Even today, the film doesn’t look or feel dated, whereas revisiting Jason Voorhees’ Excellent Adventures is mostly a fun nostalgia trip. While grooming my youngest daughter into the horror fan she is today, she found the Friday the 13th films silly and archaic. However, she absolutely loved The Thing and was surprised it was almost 40 years old.

I’ve probably seen The Thing a few dozen times since catching it in an empty theater back in ‘82. Sure, the ground-breaking (and still impressive) creature effects are what first floored me, but I’ve grown to appreciate other aspects of the film. The notion of an alien consisting of individual, free-acting cells with their own built-in instinct to survive is an intriguing concept to wrap your brain around. That it can perfectly imitate other lifeforms adds a whodunit element similar to an Agatha Christie mystery, enhanced by the bleak Antarctic setting. Taking place almost entirely in a research station during a winter storm, these 12 characters are completely cut-off from the rest of the world. Worse yet, one or more of them may have already been assimilated by the creature.

The Thing is also a smart movie that doesn’t depend on the stupidity of its characters to advance the plot. Everyone makes logical survival decisions and develop reasonable ideas for how to detect and combat the Thing (such as the “blood test” scene, a high-tension masterpiece). The fact that none of it works exacerbates the hopelessness of their struggle and the apocalyptic implications of the open-ended denouement. In my opinion, it’s still the greatest conclusion to a horror film of all time.

The overall performances have gone largely unappreciated over the years, one in particular. Kurt Russell takes another quantum leap from his clean-cut Disney image and the supporting cast of familiar faces is terrific, especially bald-&-badass Keith David (in a perfect world, he’d be an ‘80s action icon). But I think the most overlooked performance might belong to Jed, playing a sled dog that arrives at the station in the first act. Since he’s actually the Thing, Jed is required behave differently than your typical pooch, an “anti-dog,” if you will. He doesn’t bark, wag his tail or display any real emotion. He slowly and methodically lurks the halls of the station, quietly studying his new environment – and potential hosts - with blank, unblinking eyes for long stretches of time. After awhile, that stare is unnerving.

A definite graduate from the less-is-more school of acting, Jed is sort-of the canine equivalent of Ryan Gosling. As the anti-dog, Jed subtly manages to instill more dread than a scenery-chewer like the Saint Bernard in Cujo. Or maybe I’m more attuned to his performance because I’ve since-noted similar behavior in Murphy, my 12 year old Wheaten Terrier and an anti-dog if there ever was one.

A bit of background...Murphy is a dick. By that, I mean it seems like he goes out of his way to be the antithesis of any dog I’ve ever met. Wheaten Terriers are known for being playful and energetic their entire lives, yet Murphy never enjoyed playing and hates walkies. Though housebroken, he frequently drops single turds around the house like a puppy Pez dispenser. When we leave him home alone, he protests by peeing wherever I usually sit or sleep.

Speaking of me, while dogs may indeed be man’s best friend, Murphy makes it abundantly clear the feeling isn’t mutual. Oh, he probably likes me, but saves any actual love for my wife. When she isn’t around, he spends much of his time under our bed. He seldom greets me when I come home after a hard day’s work, content to make sure I’m not an intruder before going about his own business. The only time he pretends we’re actual buddies is when I’m eating something he wants.

Murphy also stares at me – a lot – even during such mundane activities as using the toilet or watching TV (he’s staring at me right now, in fact). Wherever I might be in the house, he’ll simply stand from a discreet distance and stare. It’s initially cute, but after 5-10 minutes pass and he’s still looking at me – silent, motionless and unblinking – I start getting nervous. Since we’ve lived together for 12 years, it can’t possibly be because he’s fascinated by my remote control skills. I think Murphy’s fucking with me.

Maybe he was in the room while I was watching The Thing and took inspiration from Jed, like my obnoxious co-worker who makes Seinfeld quotes part of his nutritious breakfast. More startling are the nights when I suddenly wake up at three-in-the-morning with the midnight munchies and head downstairs, only to find Murphy already standing at the base of the steps, silently staring back at me as though he’d been holding vigil. It’s really fucking creepy and fuck you, Murphy!!
Though tentacles haven’t burst from his face – yet – Murphy reminds me of the Thing in other ways, too. For those unaware, Wheaten Terriers have hair rather than fur, meaning they require at least three-to-four trips to the groomer per year. But because it’s expensive and I’m lazy (trimming my own hair only once a year to keep it out of my ass crack), I often procrastinate until he looks like a matted, eyeless Muppet. So we end up having to shave him.

We love pets because they’re cute, and they're cute because they’re fuzzy. When you shave them, they look like different creatures altogether. I shit you not, when Murphy is shaved, he’s grotesque. If I were to slather him in Karo syrup and snot, he’d be the spitting image of the monstrous dog-Thing from the movie...


On Murphy’s other shaved end is his naked butthole, a hideous pink starfish that pulses when he barks. And it's only when shaved that he feels compelled to greet me in the morning by jumping on the bed and sticking his ass-flower in my face (my wife gets the friendly end). Until his hair grows out a bit, petting my pink-skinned pooch has the same appeal as popping a stranger’s pimples. Ironically, it’s when Murphy's at his most repulsive that he shows me the most affection. Or maybe he’s just fucking with me again. A true anti-dog.

As for his role model, Jed went on to display his diversity in such films as The Journey of Natty Gann and White Fang – and even hung out with the Dead Kennedys – before passing away in 1995 at the ripe old age of 18. But for me, Murphy and horror lovers worldwide, The Thing would be his ultimate legacy. Belying the decade from which it sprang, the film holds up remarkably well compared to other horrors of the ‘80s, as well as most of John Carpenter’s subsequent work.
Posted by D.M. Anderson at 10:01 PM

That's some of the funniest writing ever!