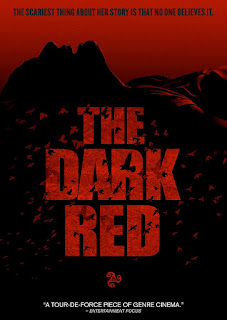 Writer-director Dan Bush’s previous film, The Vault, was a derivative but entertaining ghost story/heist thriller mash-up. Similarly, The Dark Red wears its influences on its sleeve, though it’s more of a slow-burner throughout most of the running time, building up to a rousing but predictable climax.

Sybil (April Billingsley) just lost her baby. All records indicate it was stillborn, but she’s convinced it was snatched away at birth. No one believes her, including Dr. Deluce (Kelsey Scott), the psychiatrist listening to Sybil’s wild story of falling in love with a guy named David Hollyfield (Conal Byrne), who gets her pregnant and brings her home to meet the folks. But it turns out the Hollyfields are part of a powerful cult who harvest “special” babies whose blood gives them supernatural abilities.

This is all told in flashback from the psychiatric hospital where Sybil’s been committed. Of course, anyone who’s ever seen a film about a desperate mother knows what comes next: Her story is true and she’s on her own to get her baby back. After getting out of the hospital – with remarkable ease – Sybil turns into "Mombo"...kicking ass, taking names and revealing some remarkable powers of her own.

The Dark Red doesn’t bring much new to the table, but it’s well-acted and the deliberate pace helps establish Sybil as a sympathetic character who’s easy to rally behind. By the time the story kicks into high gear – roughly the final half-hour – we’re more than ready for her to dispatch the kind of justice only Mombo can deliver. You’ll more than likely see every punch coming from a mile away, but watching it unfold is still enjoyable.