ALIEN 3: Someone Saved My Wife Tonight 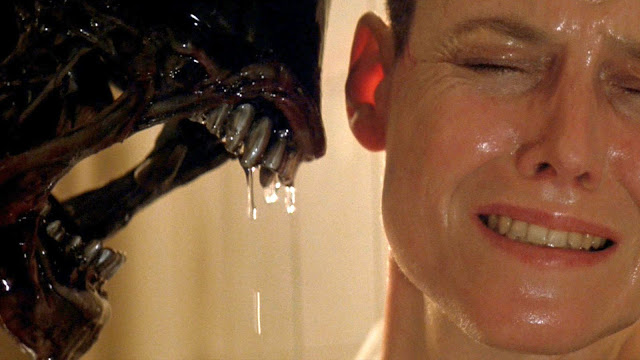 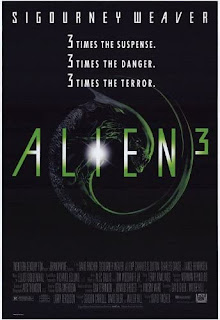 My wife almost died once. I was there when it happened, and all I can say is she’s damn lucky to be alive. Even now, 30 years later, the thought of how the incident could have turned out sends a cold shiver up my spine.

In order to recall this terrifying tale, it is unfortunately necessary to provide spoilers, which is sort of ironic considering the circumstances surrounding Francie’s brush with death. So, if you’ve never seen the infamous sci-fi suppository known as Alien 3, stop reading now.

Alien 3 takes place an unspecified amount of time after Ripley’s showdown with the xenomorph queen in Aliens, which is arguably one of the best sequels of all time, not just because it compares favorably to the original, but because it's unique unto itself. Writer/director James Cameron uses the concepts hatched in Alien (no pun intended) as a springboard for a film that's completely different in pace, tone and level of character development. It works as both a sequel and a rousing stand-alone sci-fi/action epic. Even Francie, who normally doesn’t go in for this sort of thing, liked Aliens.

Naturally, we couldn’t wait for a third entry in the franchise, having been teased about it for months with enticing trailers. And since the first two were distinctly different, we were open to the idea of Alien 3 going in a new direction. In fact, more of the same might have even been considered a disappointment. The last thing this series needed to become was Friday the 13th in space.

A lot of ideas were tossed around during Alien 3’s notoriously troubled production, which included having the story take place on Earth or, more intriguingly, a wooden planet-sized superstructure populated by monks (or something like that). Many other ideas were considered, too, all of which sounded cooler than what the final product turned out to be.

That pitch might have gone something like this: “Hey, I got it! Let’s have it take place on a lice-infested prison planet, shave the entire cast bald and kill off every character that survived the last film…including Ripley! We can get the guy who directed those Madonna videos to do this one!”

David Fincher may be a highly respected director today, but back then, he was a relative nobody entrusted to helm one of the most anticipated sequels of the era, which the powers-that-be at 20th Century Fox apparently decided should be the Schindler’s List of action movies.

But we didn’t know any of that as we lined up on opening night in 1992 to catch the next installment of the Alien franchise. It had been six years since Aliens and we were more than ready for Ripley to resume kicking serious xenomorph ass. This was gonna be great.

While I can’t speak for the rest of the packed theater that night, my excitement started to wane before the opening credits even finished, with scenes showing a xenomorph egg hatching onboard the Sulaco, the Marine ship where Ripley, Hicks, Newt and Bishop were in cryosleep after the events in Aliens.

Uh…what? How is that possible? Ripley already killed the alien queen and the rest were all vaporized in a nuclear explosion back on the planet she just escaped. Who the fuck was still around to lay an egg?

At no point does the movie attempt to answer that question, but okay. I was willing to overlook such a glaring plot hole as long as the rest of the movie delivered the gooey goods. Instead, Alien 3 is a relentless Debbie Downer that has almost none of the suspense of the first film or intense action of the second. While not terribly made or anything, it’s slow, depressing and - aside from Ripley herself - features no likable or interesting characters. Bald, filthy and dressed in rags, they even all look the same. It’s as if everyone involved on both sides of the camera were intentionally trying to tank the franchise.

And our reward for enduring two hours of bleak nihilism? Watching Ripley die horribly, an alien bursting from her chest as she falls into a vat of molten lead. Yeah…thanks, guys.

As the end credits rolled, Francie and I filed out of the theater with the rest of the crowd, most with grim expressions on their faces. This was the most downbeat capper to a trilogy I’d ever seen (at the time, we didn’t know the franchise would keep hobbling along well into the 21st Century). In the lobby, as we walked past the sizable crowd of people lined up for the next showing, Francie blurted out, fairly loudly, “I can’t believe they killed Ripley!”

Oh, you should have seen the looks on those faces in line, who seemed to turn in unison to hatefully glare at my wife as though she just beat up a child in a wheelchair.

I’m sure some of you have seen or read how The Simpsons have accurately predicted things that eventually occurred in real life. In Season Two, there’s an episode where Homer accidentally spoils The Empire Strikes Back’s big plot twist as he’s leaving the theater. Now we were living it.

Like Homer, Francie didn’t mean to spoil the movie…she was just caught up in the moment, which was an emotional sucker-punch. Still, part of me sympathized with that crowd, some who looked like they were ready to step out of line to either get a refund or burn my wife at the stake. Of course, I’d have to defend her should they have chosen the latter, but since taking on an angry mob is not among my list of skills, I simply hastened our quick exit. Looking back on it now, I like to think of my flight response as an act of heroism. Perhaps not quite as sexy as single-handedly taking on international terrorists to save my wife on Christmas Eve, but hey, Francie’s alive and that’s all that matters. Of course, that incident is funny now. And who knows, maybe she inadvertently spared a few people the agony of having to sit through Alien 3 (while saving a few bucks), which remains the worst movie in the entire franchise.
Posted by D.M. Anderson at 2:50 PM