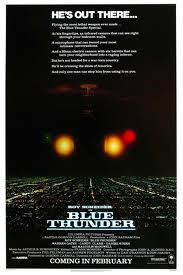 There's an early scene in Blue Thunder where LAPD chopper pilot Frank Murphy (Roy Scheider) breaks-in his new partner by flying out to Encino so they can peep in on a young beauty who does nude yoga in her living room every night. The two hover outside her spacious epic-windowed mansion, gawking while she stretches and contorts in ways most guys can only dream of their wives doing.

I had a big problem with this scene. Not because it is totally gratuitous, having nothing to do with the plot, or because it is completely implausible (who isn't gonna hear a goddamn helicopter right outside their window?). The problem was I went to go see this film with my then-wife, who had an unbelievably ugly jealous streak.

When I first met her, that jealousy of other girls was initially flattering, and I sort-of enjoyed reassuring her she was the only one for me. But it got worse (especially after we were married). Pretty soon I was berated if my head even turned in the general vicinity of a good-looking woman. It didn't stop there. If one of my co-workers was even remotely attractive, she thought I wanted to sleep with her. At her worst, not-only did she assume I wanted to do her sister, but my own cousin, too. I'm still not sure where she got the idea I was this insatiable horndog and perpetually prowling for pussy.

This insane level of jealousy applied to entertainment as well. Unless I wanted to engage in another knock-down, drag-out fight, I could no longer listen to Pat Benetar because I once made the mistake of saying she was good looking. My wife's mindset made going to movies a dicey endeavor as well, especially R-rated ones. If even a single breast popped up onscreen, I'd have to answer for it, as though I chose movies based on their boob-count. Regarding Blue Thunder, you wouldn't believe the explaining I had to do. That gratuitous-but-brief early scene is the only one which is remotely sexual, but my wife was convinced that, not only was I getting off on it, it was the main reason I wanted to see the movie. She was totally pissed at me for enjoying the movie at all, which is too bad, because Blue Thunder is one of those awesomely-dumb 80s action flicks which isn't remotely plausible, but the action and performances at least keep you amused while you're watching. 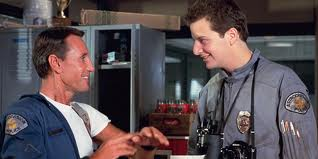 The government has developed a new, state-of-the-art, super-spy helicopter. It can see through walls, fly silently, look down dresses, and blow the bejeezus out of everything in its path. What better person to test fly it over one of the biggest cities in the world than a psychologically unstable Vietnam vet?

Roy Scheider is Frank Murphy, an L.A. cop who patrols the skies at night, thwarting robberies and peeping into naked women’s windows. In his spare time, he checks his sanity with his wristwatch. He’s entrusted to fly the new copter, nicknamed Blue Thunder, to see what it can do, during which time he discovers the Army has nefarious plans for the bird. It’s never made too clear exactly what evil the government wants to accomplish with a helicopter, but that doesn’t stop them from trying to kill Murphy. Leading the charge for Frank’s demise is Colonal Cochrane, played by a perpetually bug-eyed Malcolm McDowell.

Blue Thunder has a very high “oh, come on!” quotient, with a ludicrous story, one-dimensional characters and gaping story holes. However, much of that is negated by a truly fun climactic air battle over L.A. between Murphy and Cochrane, where buildings explode, planes are shot down, and a copter is taken out by a freight train (though no one, including our hero, seems concerned about all the massive collateral damage). Director John Badham, who never made a smart movie in his life, deftly handles these action scenes with considerable skill. He’s also aided by a great cast; Scheider is terrific (though he’s played so many cops in his career that he probably phoned this one in), as is Warren Oates (in his last role), who manages to make the most out of his cliched angry police captain character.

She wouldn't speak to me the rest of the way home, and I'm pretty certain I ended up apologizing for a scene I had no idea was coming. This particular spat was the sole reason Blue Thunder never became part of my movie collection until years later.

And you know what's ironic? In the end, she was the one who eventually ended up cheating on me.

Her bizarre jealousy actually screwed me up for awhile after our inevitable divorce. When I began dating again, I briefly forgot that it's okay to acknowledge if someone else is pretty, and normal partners don't assume you're gonna spend all your waking hours pining for that person (or their body parts). I'd sometimes sit in the theater on dates hoping no nipples would appear (how weird is that for a guy?).

I've since purchased Blue Thunder on DVD. Technically, it's a bit dated now, but still a fun movie. As for my current wife, I'm happy to say she doesn't like it either, but this time because of all the massive plot holes. She isn't at-all concerned whether or not I'm spending my waking hours fawning over some brief onscreen boobage.
Posted by D.M. Anderson at 8:12 PM

Those are all great valid questions. in the recent presidential haven't really been touched upon. at this time in america where a post-modern era of no. Harley Davidson and the Marlboro Man Jacket

As a helicopter pilot myself, yes you can hover and in the right atmospheric conditions have no one hear you. Many times an apache can be less than one mile away from terrorists who go about their business only to get a surprise hit by a hellfire or chain gun rounds. Also, it does fit in to the plot despite your not liking the scene as he is initiating a new observer pilot and it distracts them from the attack on the city council woman. What else could the writers have created that would be a plausible reason for them to shirk their police duties other than....looking at boobs, a rumor that had made its rounds in the astro division for years. He wants to be the cool lead pilot so he agrees to juice the new guy in and also, she may have heard the blade slap but some women enjoy being spied on like that. Some women are straight up exhibitionists.

Very well written post and very helpful to me. I wanted to thank you for this great read!! Coming game sims 4 cheats to show your school spirit.

Who was that naked woman