A GOOD DAY TO DIE HARD and the XD Ordeal 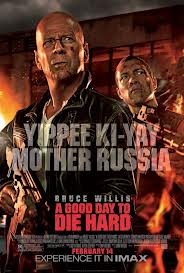 As a belated Valentine's Day gift, my wife (Francie) and I agreed to treat each other to a date in which she picked the restaurant and I chose the movie. As parents of two kids, we don’t get too many chances to got out on our own, so we made the most of the opportunity. She chose a sushi place we always enjoyed; a good choice since neither of our daughters like such cuisine. For the movie, I chose A Good Day to Die Hard because, hey, it's Bruce Willis kicking ass.

I'd read a few reviews of the movie, most writers hating it, the main criticism being it's Die Hard in-name-only. Well, of course it is. So were the previous two. Willis flicks like Red, The Last Boy Scout, Hostage and 16 Blocks could have been Die Hard movies, too, since he pretty-much plays the same guy in all of 'em. If A Good Day to Die Hard were titled Bruce Willis Blows Up Half of Russia, I don’t think critics would have been quite as harsh. But when you stick Die Hard in the title, you're creating audience expectations that'll never be met. Of course A Good Day to Die Hard doesn't hold a candle to the 1988 original. Neither does any other action movie, so making such an obvious claim is redundant.

So, as a sequel, is it any good? No. In fact, it's the worst of the bunch. The plot, involving some Russian baddies doing nasty things with uranium leftover from Chernobyl, is convoluted and dull, and there's no truly memorable villain we love to hate (Alan Rickman simply set the bar too fucking high in the original, though Jeremy Irons came close). This one also borrows the estranged family subplot from Live Free or Die Hard (this time involving McClane's son, who works for the CIA). And by now, McClane is no longer the tough-but-vulnerable cop trapped in a situation beyond his control...he's now an indestructable, one-man wrecking crew. And although there's plenty o' guns, crashes and shit blowing up, this one seems somehow smaller, less epic, than the other films in the series, not helped by the surprisingly short running time (all the others ran over two hours, this one clocks in at only 97 minutes). 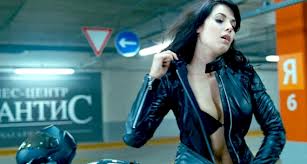 But as a pure action movie where Bruce Willis does his Bruce Willis thing, A Good Day to Die Hard ain't that bad at all. It's certainly better than a lot of the CGI-happy stuff passing itself off as action these days. Besides, sometimes you just want to spend your Valentine's Day watching things explode.

Still, my wife and I felt ripped off.

Hoping to save a few bucks by catching a matinee, I went online to select a showtime. It was playing at the Century 20 Theater at Clackamas Town Center, the mall near our house and close to the sushi place Francie chose. We were good-to-go. As parents, the two of us don't often get to escape on own, so we were looking forward to it...mindless mayhem and sushi, two of our favorite pastimes.

Our elation ended soon after we got to the theater. After telling the kid at the box office what we chose to see, he nonchalantly asked for $25.

What? 25 bucks? This is a matinee! I chose this time to save some cash!

I was a little pissed, partially because I don’t have money falling out of my ass, but mainly because when I looked up showtimes, nowhere did it say anything about XD or that it included an inflated ticket price.

Exasperated, I turned to Francie and asked her if she wanted to do dinner first and come back for the 4:15 show. She shook her head and replied, “We’re already here. Let’s just go.”

XD is something dreamt up by Century Theaters, and stands for Extreme Digital Cinema (complete with the wildly scrawled red X in the logo to remind us how extreme it is). Extreme is an increasingly meaningless word (especially when shortened to Xtreme) used by PR guys for promoting anything from sports drinks to new football leagues. In this case, it is Century Theaters’ answer to IMAX, but when my wife and I entered the so-called XD theater to catch A Good Day to Die Hard, what we got from the inflated ticket price was a bigger screen, a movie-going experience which can be just-as-easily accomplished by simply sitting closer. In other words, XD is a gimmick created to lighten wallets, but really does nothing to enhance a movie. It’s a bigger rip-off than 3-D.

97 minutes later (120 counting all the trailers), me and Francie walked out feeling duped and short-changed. Yeah, A Good Day to Die Hard is a decent enough big screen flick certainly worth the eight dollar matinee price I was expecting to pay. But 25 bucks for two tickets? Jesus Christ, tickets to my first rock concert were only 10 bucks each, and that was to see Rush at the height of their popularity. As much as I love watching Bruce Willis blow shit up (as John McClane or not), this whole ordeal affected how I felt about the movie far more than its worth as an official Die Hard sequel.

To make matters worse, even though we’d gone there before and enjoyed it, the sushi restaurant we went to afterwards was shitty, too. Thank God Francie and I have a sense of humor, because talking about how shitty everything was made our date pretty fun.
Posted by D.M. Anderson at 2:40 PM