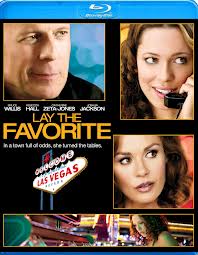 We here at Free Kittens are big fans. You can be a bad-ass. You can be funny. You are willing to check your ego at the door and take supporting roles in smaller movies. You obviously love what you do, and we love you for it. But damn buddy, you don’t have to say yes to every script that lands on your agent’s desk. I mean, of the six movies released in 2012 in which you appeared, only two of ‘em were any good (Looper & Moonrise Kingdom). Far be it from us to tell you how to manage your career, because you’ve done pretty well for yourself. But in our humble opinion, you should’ve passed on Lay the Favorite.

Of course, it’s easy for us to play Monday morning quarterback. We don’t make movies; we only watch ‘em. For all we know, the original script you were given was a hell of a lot better than what ended up onscreen. Lay the Favorite doesn’t seem to know if it wants to be a comedy, a quirky character piece or low-key drama. The story is all over the place, and even though this is based on a memoir by Beth Raymer, an ex-exotic dancer with a keen talent for numbers in the world of sports gambling (played in the movie by Rebecca Hall), nowhere are we ever really shown this supposed gift in action. In fact, it seems like a lot of key scenes are totally missing.

Or maybe you were attracted to your character, Dink Heimowitz, professional Vegas sports gambler with a superstitious streak. We can see why you’d initially want to play the role, since he’s congenial, confident and occasionally funny, but also somewhat emotionally vulnerable, especially regarding his relationship with his insanely jealous wife, Tulip (Catherine Zeta-Jones). But in Lay the Favorite, your character’s personality changes on a dime; one scene you’re showing Beth the ropes - with a bit of sexual tension thrown in - the next you’re throwing childish tantrums, breaking stuff and repeatedly firing her, then you're back to being the sympathetic mentor. The same could be said about all the other characters, too. Tulip is quickly established as a cast-iron bitch. Then, with no transitional showing her change-of-heart, we’re supposed to suddenly like her? And Beth, the main character? One second she’s trying to bed you down, the next she’s got a new squeeze who appears out of nowhere and she's back to treating you like a father figure. 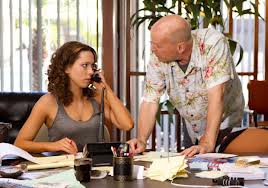 "...and make sure they go light on the sauce this time."

Maybe you liked who you’d be working with, and indeed, the cast is an impressive one....Rebecca Hall, Catheine Zeta-Jones, Vince Vaughn, Joshua Jackson. Still, we have the feeling that fans of those actors are composing similar fan letters like this. Then there’s director Stephen Frears, whose resume includes some great stuff like Dangerous Liaisons, High Fidelity & The Queen. Perhaps his shining moments as a director overshadow the fact he’s occasionally made some crap, too.

Don’t get us wrong, Sir Willis...Lay the Favorite isn’t necessarily awful (well, not Hudson Hawk awful). You do a decent enough job with the character you were handed, as does the rest of the cast. There are even a few moments were we get to bask in your overall 'Willisness' (patent pending). But the movie just kinda rambles for 90 minutes without a single memorable scene or reason why, in the end, we should care how things turn out. And considering you are given top billing for a supporting role, we felt let down. Lay the Favorite is the kind of movie that might hold one’s attention for a few minutes when channel surfing on a dull Saturday night, but that’s faint praise considering Megashark vs. Giant Octopus was able to accomplish the same feat (at least with us).

As big-time fans, even though we are pretty certain you’ll never win any kind of Oscar other than a lifetime achievement award, movies like this are not worthy of your awesome talent at simply being Bruce Willis. We hope you take our advice in the spirit it is intended, and wish you the best of luck cranking out Die Hard 6.