10. PARENTHOOD
Little kids don't care where they spill the groceries. They don't have to clean it up.

9. SUPER SIZE ME
After only a couple of days eating McDonald's food, Morgan Spurlock's experiment gets the best of him. It's not only nauseating, it's a little disturbing, too.

8. STAND BY ME
Lard Ass Hogan's intestinal revenge is just the kind of story a pre-teen would make-up just to amuse his friends.

7. THE SANDLOT
Puke sprays from a spinning carnival ride like a lawn sprinkler. This just had to have happened in real life somewhere.

6. BAD TASTE
Several aliens brew some homemade stomach chowder, then commence drinking it, accompanied by the most hideous sound effects you'll ever hear...all courtesy of the guy who brought you The Lord of the Rings.

5. THE FLY (1986)
If I was forced to make a choice between death or watching my appendages dissolved by fly vomit, I'd had to think long and hard about it.

4. JACKASS
When you're willing to do something which makes you hurl on camera for the sake of entertainment...man, that's dedication to your craft.

3. APOLLO 13
Space really is the best place to lose your lunch. You don't get any on you.

2. THE EXORCIST Arguably the most famous vomit scene of all time, it would be #1 if it weren't for... 1. Monty Python's THE MEANING OF LIFE The sketch in which the world's fattest man visits a restaurant, pausing to unleash gallons of projectile puke every few seconds, is so over-the-top it becomes almost surreal. 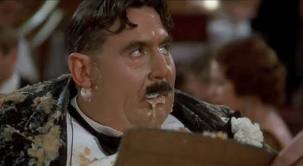