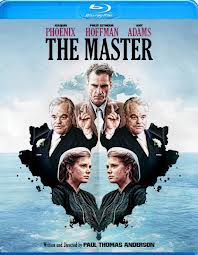 I know almost nothing about Scientology, only that this so-called religion involves the belief we were dropped off here by aliens, and that Tom Cruise is its poster boy. I know even less about Scientology’s founder, L. Ron Hubbard, other than he also wrote a lot of shitty sci-fi novels (if you think the movie, Battlefield Earth, was bad, try plowing through the 1,000 page book).

I think most folks see it more as a cult than a true religion, but since lot of high-profile celebrities are card-carrying Scientologists, this cult gets a lot of attention (mostly negative).

Many claimed The Master is a thinly-disguised account of Hubbard and the religion he created. Writer/director Paul Thomas Anderson has said, although the character of Lancaster Dodd (Philip Seymour Hoffman) was partially inspired by Hubbard, The Master is not the story of Scientology and its founder. Still, a lot of folks pointed out the similarities between “The Cause” (as it’s called in the film) and Scientology, making it hard to watch the movie without reaching the same conclusion. In fact, drawing such comparisons makes it more watchable.

In the film, we follow Freddie Quell (Joaquin Phoenix), recently discharged from the Navy at the end of World War II, as he drifts from woman to woman, job to job, never really fitting into post-war society. He’s also a raging alcoholic, often mixing his own concoctions out of household chemicals. After one of his homemade brews poisons a co-worker, Quell stows away on a ship rented by Dodd, a charismatic writer, philosopher and founder of a quasi-religious group called “The Cause.” For reasons not entirely clear, Dodd takes an immediate liking to Quell and places him high in the ranks his growing entourage, despite the misgivings of his family, who see Quell as an irredeemable & dangerous drunk. For the most part, Quell remains fiercely (sometimes violently) loyal to Dodd, even though we get the impression that he often thinks the man is as full of shit as his critics do.

The Master is one of those movies which rides on the backs of its actors. Both Phoenix and Hoffman are phenomenal. When the two of them share the screen (which is often), the movie is fascinating, especially since neither character appears to have all their marbles. It’s easy to see why they (as well as Amy Adams, playing Dodd’s zealous wife) are nominated for Oscars. On the other hand, while we marvel over the performances, for a character-driven story, none of these characters are even remotely likable. Quell is the same drunken sleazeball at the end of the movie that he was at the start; Dodd is outwardly charming and charismatic, but there’s menace bubbling under the surface that borders on disturbing. And that’s fine, I guess. I don’t have to like who I’m watching in order to find them interesting, but spending 138 minutes with them is about 40 minutes too many.

My main problem with The Master is that the story moves in fits and starts. When focused on Dodd’s ramblings and The Cause, it’s compelling. But there are also several points where a scene really starts to get interesting, but is either cut short or sabotaged by Anderson’s need be ambiguous & arty. For example, one scene has Dodd as the center of attention at a get-together, and just when we think he’s going to spout more of his loony-but-fascinating philosophy, instead he breaks into song while Quell pictures every woman in the room completely naked. Yeah, I know the scene is supposed to solidify where Quell’s head is at, but that was already well-established before.

But again, the performances carry the movie, making The Master worth checking out at least once. Phoenix has never been better, though he looks like hell...gaunt, aged and hardened by life. Even better is Hoffman, who straddles a fine line between confidence and paranoia. It’s one of the more subtly creepy performances I’ve seen in a long time.

While I’m convinced “The Cause” itself is supposed to be a none-too-flattering view on Scientology, it could arguably represent any cult-like religion. Either way, I seriously doubt Mr. Cruise has this particular film in his home video collection.