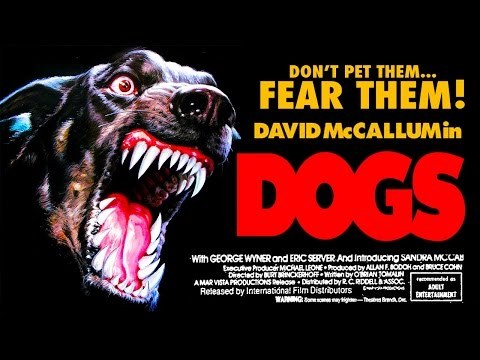 After 45 years, I finally got to see Dogs...and a dose of embarrassment to go with it.

A shit-ton of nature-run-amok thrillers were unleashed in the wake of Jaws fever, with which I was hopelessly afflicted. I tried to catch ‘em all, too, good or bad (mostly the latter).  However, this one managed to escape me. Unlike most killer critter flicks of the time, it was rated R and no way were my folks gonna let that happen. Hell, it took six months of begging and grovelling for them to allow Jaws into my life.

Dogs came-and-went in theaters faster than shit through a goose, so I never got the chance to defy Mom by sneaking-in to see it. Since these were the days before home video, the film simply disappeared and never came back. Too bad...even though critical consensus suggested Dogs was all kinds of awful, a pack of cranky canines sounded like a great time at the movies.

The film was retitled Slaughter for its 1988 VHS release, but I never spotted it on the shelves of video stores I regularly haunted. Not that I was actively looking for it; the movie had been out-of-sight, out-of-mind for too long.

Fast forward a few decades, and to my surprise, Amazon offered Dogs as a purchase suggestion while I was searching for something else. Its title restored, the Blu-ray cover sported the same awesome artwork as the original one-sheet. Yaaass! Sure, I’m older, wiser and have since-developed into something of a cinephile with fairly discriminating tastes, but a pack of cranky canines still sounds like a great time at the movies!

I spend way too much money on Amazon, which has lately been exacerbated by the boredom of hunkering at home during the pandemic. So I always try to justify a frivolous purchase by also including something I actually need, such as a set of Alien salt-&-pepper shakers (hey, if you saw them, you’d need them, too). In this case, I supplemented my purchase of Dogs with a little date-night enhancement for me and the missus...strawberry flavored.

And I won’t be doing that again.

My wife and I have enjoyed visiting other online stores for various play-time products. However, it appears that discretion is not in Amazon’s vocabulary. The package arrived about a week later, my asshole dog going apeshit as the doorbell rang because he's still convinced Amazon’s entire workforce consists of assassins. I opened the door and picked up the package, waving thanks to the driver as he reached his truck. He looked back with a sly grin...more like a contemptuous smirk.

I glanced down at the box in my hands, with a label that clearly listed its contents: DVD + LUBRICANT.

In the truck, the driver was on his phone, still grinning in my direction as he spoke. Oh, geez, what the hell was he telling the guy on the other end?

I quickly put that embarrassing episode behind me, excited that my package had finally arrived, as was the wife.

45 years after the trailer first wowed me as a 12 year old, Dogs did not disappoint. That’s not to say it turned out to be a good film. Even back in the day, I wasn’t expecting the second coming of Jaws...or even Grizzly. How could it be? After all, these weren’t mutated monsters or a breed we typically associate with viciousness. To paraphrase the literary classic, Go, Dog, Go!, it’s more like a big dog party...big dogs, little dogs, black dogs and white dogs. The cast-killing critters are an eclectic batch of German shepherds, sheepdogs, terriers, hounds, Irish setters and labradors. You know...our pets, rendered crazy by pheromones emitting from a local university’s research lab. Beginning with the opening scene - a pack of pups running up a neighborhood street in slow-motion as the title turns crimson red - I knew I was in for a goofy good time.

I understand that dogs can be dangerous, even small ones. However, as horror heavies go, the roving Rovers in Dogs are only marginally more menacing than the ravenous rabbits in Night of the Lepus. I especially enjoyed the scene where a dozen of these animals have hundreds of dumb college kids trapped in their dorm by casually sitting outside like they’re awaiting treats.

David McCallum stars as Harlan Thompson, a perpetually drunk professor whose dire warnings are ignored until it’s too late. Though I suspect a bit of method acting, he's actually quite good in the role. The other performances are generally pretty pedestrian, though future Spaceball George Wyner has some amusing moments. Love interest Sandra McCabe is particularly awful and possesses what might be the most annoying scream in horror movie history. The film also has its own Mayor Vaughn in college dean Dr. Koppelman (Sterling Swanson), Thompson’s boss who doesn’t believe him until his own Irish setter ends the debate. My favorite scene shows Koppelman being forced by his wife to call the governor for help from the National Guard. The one-way phone conversation is nearly as funny as President Muffley’s call to the Kremlin in Dr. Strangelove, probably because it’s not intended to be.

The film even manages a straight-faced canine version of Psycho’s shower scene (featuring a pre-Dallas Linda Gray) and comes to an ominous coda that suggests cats will be coming for us next.

Apparently, a sequel featuring killer cats actually was planned at one time, but never materialized. That’s unfortunate because there are no good killer cat movies. Come to think of it, there aren’t any bad killer cat movies, either. At any rate, how Dogs didn’t become a cult classic is beyond me, since it’s just as amusing as other examples of ‘70s cinema sludge like The Car and Night of the Lepus. But I guess all that matters is the film ended up being worth the decades-long wait, though ultimately less entertaining than the LUBRICANT (all caps) that came with it.
Posted by D.M. Anderson at 4:20 PM