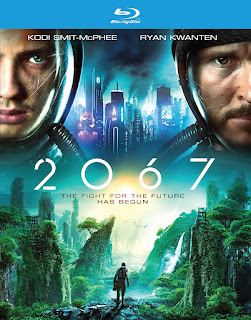 The future is gonna suck, of course. Just how bad it’ll suck depends on which movie you’re watching.

2067 gives us one of the bleaker futures I’ve seen lately. All plant life has long-since died and most of the world is uninhabitable. In the one remaining city, synthetically-produced oxygen is its most valuable resource. However, breathing this stuff over time eventually causes ‘The Sickness,’ which is fatal. Human extinction appears to be inevitable...

...at least until Chronicorp fires-up a time portal (the Chronicom) invented by scientist Richard Whyte, who apparently committed suicide years earlier. They send a message 400 years into the future. To their surprise, they receive a cryptic three-word reply: Send Ethan Whyte (Richard’s son, played by Kodi Smit-McPhee). Chronicorp's CTO (Regina Jackson) believes this means humankind managed to survive, so she wants Ethan to go into the portal and bring back something that’ll save the present.

That’s easier said than done, of course, which 2067 demonstrates with some intriguing ideas regarding the perils of time travel (such as Ethan coming across his own centuries-old corpse). In the future, the world does-indeed bounce back, all plant life having returned in abundance. People, however, remain extinct. So who sent the message?

When focused on piecing the puzzle together, 2067 is often pretty interesting (though I’m not sure how well the resolution stands up to any real scrutiny). And for a moderately-budgeted sci-fi film, the production design and CGI are impressive. However, Ethan is a dull protagonist, even with all the emotional baggage. Jude (Ryan Kwanten), his surrogate guardian charged with keeping him safe, mostly serves to create superficial conflict. Unfortunately, these two bickering buddies dominate most of the screen time.

Still, the film’s pessimistic assessment of humankind befits the bleak subject matter, which certainly keeps it watchable. Some viewers might even walk away thinking the future world of 2067 doesn’t deserve the last-ditch opportunity to bail itself out. I don’t know if that was writer-director Seth Larney’s intent, but he presents a strong argument.