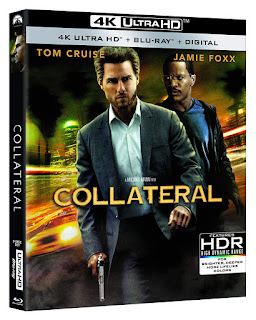 The distinction between a hero and a villain can sometimes be a gray area. But for a guy like Tom Cruise, they’re one in the same.

Not that Vincent, his character in Collateral, would ever be mistaken for a nice guy. He’s a cold-blooded, remorseless and ruthlessly efficient killer-for-hire. However, Cruise doesn’t really play him much differently from his roles as Ethan Hunt or Jack Reacher. There isn’t anything wrong with that, either. He’s always been more fun when giving-up all pretenses of being a real actor to focus on simply being Tom Cruise, which he obviously does better than anyone.

And he’s a hell of a lot of fun in Collateral. The novelty of watching Cruise use all the weapons in his arsenal - physicality, confidence, intensity, karate-hands sprinting - for evil purposes makes him a uniquely enjoyable antagonist. There are times during Vincent’s one-night assassination tour when we almost feel compelled to root for him. So it’s fortunate for the movie that Jamie Foxx is so damn likable. As congenial cab driver Max Durocher - forced to drive Vincent to his targets - he gives the character proportionate measures of uncertainty, vulnerability and fortitude. Max’s humanity is the perfect foil to Vincent’s mercilessness.

Collateral also remains director Michael Mann’s last great film, which I tend to look at as sort-of a companion piece to Heat. In addition to dynamic protagonists & antagonists, Los Angeles is practically a supporting character, with Mann making great use of various nighttime locations. His attention to such peripheral aesthetic and expository details give the virtuosic action sequences considerable dramatic heft.

I’m not-yet completely sold on the virtues of 4K for every movie. The film looks pretty damn good here, but so did the original Blu-ray. In my opinion, there may not be a significant enough difference in the picture or sound to really warrant an upgrade. However, Collateral itself is one of the best action movies of the 2000s and a rare opportunity for Tom Cruise to get his dark side on. That alone makes it essential.

“CITY OF NIGHT: THE MAKING OF COLLATERAL” - A lengthy and interesting behind-the-scenes documentary.

FEATURETTES - “Special Delivery” (Cruise goes out in public as a FedEx driver; that’d be a fun movie unto itself); “”Shooting on Location: Annie’s Office”; “Tom Cruise & Jamie Foxx Rehearse” (in the director’s office and in a cut-away car); “Visual FX: MTA Train” (a lot more work went into this scene than you’d expect)