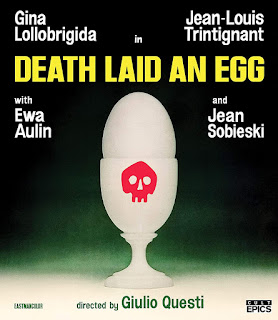 Murder, fetish, genetic manipulation, Gina Lollobrigida...and chickens. Lots and lots of chickens. These story elements make strange bedfellows in Death Laid an Egg, an Italian film that wallows in weirdness. Many consider it an early example of giallo, but while it superficially shares some of the same aesthetics, an all-over-the-map narrative sort-of renders it unclassifiable.

Marco is having an affair with Anna’s nubile live-in niece, Gabri (Ewa Aulin), and it’s hinted that Anna’s pretty sweet on her, too. But even though Marco wants to leave Anna and run away with her, Gabri is spending more time with Mondaini. Meanwhile, Anna suspects Marco is keeping a part of his life secret and she’s determined to know what it is. That secret is the crux of the story: Marco appears to be a serial killer, getting sexual gratification from carving up prostitutes.

However, things aren’t quite what they seem, which is a large part of what makes Death Laid an Egg morbidly interesting. Virtually every major character is amoral and conniving. Rather than give details that would spoil some nifty surprises, I'll just mention the irony of Marco turning out to be the most sympathetic character in the entire film.

Elsewhere, insanity reigns. Oddball characters, ambiguous monologues, partner-swapping, a dog’s unfortunate fate, grotesque imagery, science gone mad, chicken montages, chicken plucking, chicken slaughter, chicken liberation and a strutting tease of a performance by Lollobrigida. It’s all set to a grating, atonal score that sounds like it was performed by folks still learning their instruments. There are also moments where the film was apparently edited with a weed whacker.

Yet somehow, it works, the same way sticking Fritos in your PB&J tastes better than it has a right to. Even when the story strays off the beaten path - which is often - seemingly inconsequential scenes have an off-kilter quality that’s strangely compelling. Though I personally wouldn’t consider Death Laid an Egg a giallo film, it’ll certainly appeal to fans of the genre, especially in its depiction of Marco’s sexual proclivities. Weird, perplexing, a little perverse and undoubtedly a product of its decade, this Italian oddity is worth checking out for adventurous viewers.

“PLUCKED” VERSION - Edited version of the film, which is 20 minutes shorter. Those cuts are heavily discussed in some of the other bonus features.

FILM REVIEW - By critic Antonio Bruschini, where we get a long, loving look up the man’s nose. Who the hell chose that camera angle?

GIULIO QUESTI: THE OUTSIDER - Vintage interview with the late director.