ANTEBELLUM and the Wonderful Ruse 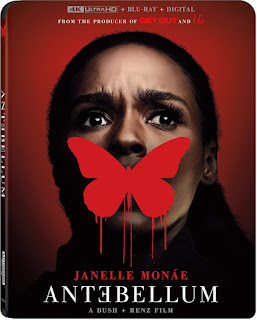 Before COVID-19 screwed up all of my spring movie-going plans, Antebellum was high on my gotta-see list. The trailer made it look like an atmospheric piece of Southern Gothic horror set during the Civil War and told from the perspective of African-American slaves.

When it was finally released on-demand, the film generally received negative reviews, though I mostly avoided reading any of them because I prefer to know as little as possible about a horror movie’s plot before checking it out myself. In this case, I’m glad I did because Antebellum completely blindsided me with one of the most unexpected plot twists I’ve seen in a long time. Maybe ever.

While everyone's entitled to an opinion, I briefly wondered if the critics who panned it watched the same movie I did.

At any rate, I’m gonna afford you the same courtesy and not describe the story itself in any way whatsoever. I will say the film is neatly divided into three distinct acts that, in the end, fit together like Legos. The first act is the most emotionally harrowing, its depiction of America’s darkest chapter sure to instill empathy and outrage in equal measures. The middle act dials things down considerably, almost to the point of being meandering. Despite some fleeting moments of foreshadowing punctuated by the usual ‘ominous’ incidental music, it seems like a whole lotta nothing is happening.

But with hindsight, the entire middle act is a well-conceived ruse, masterfully misleading the viewer before delivering a jaw-dropping plot revelation that sets the stage for the slam-bang climax. First-time writer-directors Gerard Bush & Christopher Renz built a wonderfully-structured narrative, punctuated by atmospheric cinematography, authentic production design and a powerful performance by Jenaelle Monáe as the main protagonist.

Antebellum may not be an all-time horror classic (and perhaps not a horror film, at all), but it takes a lot to really surprise me anymore, so I gotta tip my hat to any movie that manages that. Though the clues are there, I did not see the plot twist coming and am willing to wager most other viewers won’t either. Forgive me for not elaborating further, but the less you know about the film going in, the better.

“THE HISTORY IN FRONT OF US: DECONSTRUCTING ANTEBELLUM” - Excellent two-part documentary, with behind-the-scenes footage and interviews the various cast & crew.

FEATURETTES - “A Hint of Horror: The Clues of Antebellum” (the movie is chock-full of Easter Eggs, some of which are pointed out here); “Opening Antebellum” (writer-directors Gerard Bush & Christopher Renz discuss the lengthy one-take opening shot).

MEE-OW! LIKE TAUNTING A MOUSE TO DEATH.
Posted by D.M. Anderson at 8:46 PM