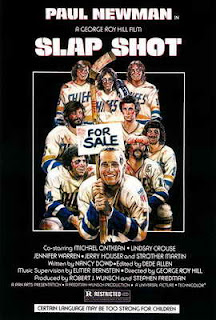 I live in Portland, Oregon, which was never exactly a mecca for pro sports. We have the Portland Trail Blazers, who have accumulated a whopping one NBA championship in its five decade history. However, the Blazers are more dubiously remembered by the rest of the world as the team that passed up on Michael Jordan in the 1984 draft. Jordan, of course, went to the Chicago Bulls and ironically mopped the floor with the Blazers in the 1992 finals. He'd go on to win four more championships, while Portland hasn't been back since.

Portland has a pro soccer team, too, the Timbers. But let's be honest...how many of us really care about soccer in this country? Oh sure, we pretend to enjoy the game during the World Cup and support our kids on the muddy sidelines with the other soccer moms. Professionally, though, American soccer has never really taken off the way hipsters would have you believe. As of this writing, the Portland Timbers are one of the hottest tickets in town, but that's because they win a lot and it's a good excuse to get publicly shitfaced on microbrews. This current team is also the fourth attempt to establish pro soccer in Portland since 1975. Each of the previous teams (all called the Timbers) eventually folded once the novelty wore off or they stopped winning.

Portland is apparently not good enough for other pro sports. There's no football because the NFL assumes the entire Pacific Northwest is content to cheer-on the Seattle Seahawks. The MLB keeps teasing us with a franchise, but if you've ever spent an appreciable amount of time here, you'd know living in the perpetually damp City of Roses is like being on the set of Blade Runner 24/7.

But hockey? While we don't have an NHL team - though not for a lack of trying - Portland's been a hockey town for as long as I can remember. The Portland Winterhawks are a minor league team in the Western Hockey League and have played in the same venue as the Blazers for the past 40 years, often selling just as many tickets per game. Predating the Winterhawks were the Portland Buckaroos. Originally founded in 1928, the Buckaroos played in various regional leagues until 1941, then were resurrected in 1960 to play in the city's all-new Memorial Coliseum. This was the hockey I grew up with in the early 70s. 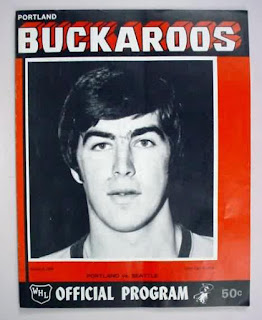 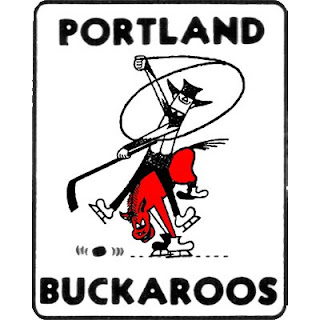 We regularly attended Buckaroos games when I was a kid, cheering our home team as they battled the likes of the Denver Spurs, Vancouver Canucks and, our dreaded arch rivals, the Seattle Totems. The players themselves were heroes to us local kids. In the days before plexiglass, we'd line-up along the rink's outer wall for autographs after pre-game warm-ups. Some of players would even use their sticks to flip practice pucks over chain-link fence into the outstretched hands of eager kids. I had a few of these pucks and a stack of autographed programs, which I treasured for years. For my tenth birthday, my parents managed to acquire an actual hockey stick used in one of the games and got it signed by every current member of the Buckaroos roster. The pucks and programs were lost over time, but that hockey stick still stands in the corner of my old bedroom (which has since become Dad's sports den).

Players came and went fairly regularly. Some were called up to the pros, but most made the rounds among other regional teams for their entire careers. But the Buckaroos did have its share of stalwarts... Art Jones, Andy Hebenton, Dave Kelly, Jimmy MacLeod, to name a few. My favorite player, though, was Connie Madigan, mainly because he got in the most fights.

To me, these guys were celebrities every bit as famous as Roger Staubach, Wilt Chamberlain and Muhammad Ali. At that age, I had no idea the Buckaroos were just a semi-pro hockey team comprised mostly of guys who were either on the downsides of their careers or would never make it to the NHL, though Madigan was recruited to play 25 games with the St. Louis Blues one year (at age 38, he was the oldest rookie ever). It's doubtful anyone outside the broadcasting range of KPTV - the local station that sometimes broadcasted games - even knew who the Buckaroos were.

In reality, these players probably didn't make any more money playing hockey than my dad did teaching middle school. I'm pretty certain I once saw goalie Dave Kelly in a Safeway parking lot, loading his own groceries into the trunk of a Volkswagen Beetle. Longtime team captain Andy Hebenton had owned a small, seedy used car lot on 82nd Avenue for years, which I later learned when shopping for my first vehicle; his office walls were lined with old sports photos and news articles. Though he appeared to appreciate that I remembered his glory days, it didn't stop him from selling me a piece of shit.

The Portland Buckaroos were just one of hundreds of hockey teams that would pop up in places like Saskatoon, Spokane, Johnstown, Winnipeg or Salt Lake City, their longevity as organizations largely dependent on the local economy. In short, virtually every city with a half-assed arena had its own Portland Buckaroos. Charlestown's was the Chiefs.

Actually, both Charlestown and the Chiefs were the fictional creations of Nancy Dowd, the screenwriter of Slap Shot, arguably one of the greatest sports movies of all time and widely considered a classic. The film was unapologetically profane even by modern standards, featuring Paul Newman, of all people, talking about sucking pussy.

Newman plays Reggie Dunlop, the aging player/coach of the Charlestown Chiefs, a team on the verge of folding because, not only is attendance terrible, the local factory is about to lay-off most of its workers. Who can afford to take in a hockey game when they're unemployed? However, when three simple-minded goons known as the Hanson Brothers unleash their brutal brand of barbarism on the ice - to the joy of the crowd - Reggie and the rest of the team are inspired to start playing dirty. Pretty soon, the Chiefs are winning games and selling-out the arena. None of this sits too well with Ned Braden (Michael Ontkean), the only player on the team talented enough for a possible future in the NHL.

Meanwhile, with the help of a local sports writer, Reggie spreads a rumor that the Chiefs may get a new lease on life from being purchased and relocated to Florida; he hopes the story might inspire someone with deep enough pockets to do that very thing. The climax - one of funniest ever shot - has the Chiefs in the championship, squaring-off against Syracuse, who loads their team with the most notorious and legendary thugs who ever strapped on skates (including "Mad Dog" Madison, played by none other than Connie Madigan!).

Admittedly, much of Slap Shot's enduring appeal is the vulgar dialogue, game violence and the onscreen antics of the Hanson Brothers. The film turned the trio who portrayed them - real life hockey players themselves - into cult heroes who still make public appearances as those characters. Much of the mayhem is exaggerated, of course, though anyone who's ever regularly followed minor league hockey can probably attest that it's generally a lot more violent than the NHL, with rosters consisting of players whose aggression exceeds their finesse. And to top it all off, few of these crazy bastards ever wore helmets (which weren't required back then).

But for the most part, Slap Shot looks and feels authentic. When they aren't tearing-it-up on the ice, these characters are no different from the blue collar workers in the stands. They may be local heroes, but don't live in luxury. They have tiny apartments, drink on weekends, worry about their next payday, travel to games in a beat-up old bus and share motel rooms on the road. Nancy Dowd based the screenplay on her brother's own experiences playing in the minor leagues, from the run-down arenas to local public events players are forced to participate in. Though I still can't picture someone like Art Jones whipping his dick out during a fashion show, the Charlestown Chiefs are essentially the Portland Buckaroos.

By the time I saw Slap Shot in the late 70s, the Buckaroos were long gone, as was my overall interest in hockey, so I can't say I was disillusioned. Still, I suppose the film's reality did burst one of my childhood bubbles. The objects of my adoration were never superstars...just a bunch of average Joes trying to make a living in a town that wasn't considered worthy of a real hockey team.

Much like the Charlestown Chiefs, the Portland Buckaroos folded a few years earlier, playing their last season in 1975. By then, interest in them had waned to the point they were playing weekend afternoons at the tiny Jantzen Beach Arena, which seated about 500 spectators and probably made more money from parents dropping their kids off to skate while they shopped at the adjoining mall. My dad remained a fan 'till the end, though, then later threw his support behind the newly-formed Portland Winterhawks a few years later.

Interestingly, even though most of them originally hailed from Canada, many of the old Buckaroos chose to stay in Portland after their playing days were done. And as of this writing, a surprising number of them are still alive, now in their 70s and 80s, of course. I guess they loved us as much as we loved them.