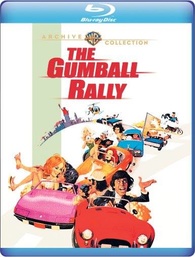 The Gumball Rally evokes really fond memories, so please indulge me if I give this Blu-Ray release a higher rating than it might warrant.

Nearly every week, I'd hit the Cinema V, a local second-run theater near my house, to catch double-bills for less than a buck. Sometimes I biked there, other times Mom or Dad would drop me off with a friend. The place was old, dank and sold Milk Duds dating back to the Middle Ages. As hang-outs go, it was second only to 7-Eleven as the most wonderful place in the world. That's where I first caught The Gumball Rally (with a Vanishing Point chaser). I'd seen plenty of car chase movies before - which had their heyday in the 70s - but this one struck a chord with me and remains one of my childhood favorites.

On the other hand, maybe it does warrant more acknowledgment & praise than its relative obscurity suggests.

On the surface, The Gumball Rally is just another car chase movie made during a decade rife with them. It has most of the same ingredients...hot cars, outlaw antiheroes, idiot cops, sexy babes, a plot with the complexity of Go Dog Go and, naturally, plenty of high-speed motorporn. A few of these crash-fests went on to become cult classics - like the aforementioned Vanishing Point - but most were brain-dead junk food made on-the-cheap and destined to be forgotten within weeks of their release.

While The Gumball Rally walks & talks like its contemporaries, beneath its turbo-charged exterior beats the heart of old-fashioned madcap comedies like The Great Race, Monte Carlo or Bust and It's a Mad, Mad, Mad, Mad World (with a dash of Looney Tunes). The humor is broad, silly...even a little corny. But the whole thing is constantly good-natured and what little violence there is is strictly of the slapstick variety. In fact, if not for the preponderance of boob jokes, this could (almost) pass muster as a family film.

Unusual for the genre - at least until Burt Reynolds went into the Smokey and the Bandit business - the film boasts an impressive ensemble cast consisting of respected character actors, led by Michael Sarrazin (channeling his inner Peter Fonda...and a bit of Bugs Bunny thrown in for good measure). The fun they have with their characters (no matter how broadly drawn) is infectious. A young Raul Julia steals the show as oversexed Italian race driver Franco - Pepe Le Pew personified - while Normann Burton makes a perfect Wile E. Coyote (beleaguered expression and all) as the hapless Lt. Roscoe.

Though The Gumball Rally is played strictly or laughs, it doesn't skimp on high-speed thrills, which are expertly choreographed and shot, with far better production values than the average chase film of the time. It's all punctuated by a music score that combines ragtime, jazz and what resembles music from a Quinn Martin cop show. Yet somehow it fits, going a long way in establishing the jovial tone of the entire movie.

Sure, I may be biased, but what can't be disputed is the movie's influence. Not only was The Gumball Rally was the first of a wave of similar films depicting an illegal coast-to-coast road race (all inferior rip-offs), it eventually inspired real-life racing events all over the world, the most famous being the annual Gumball 3000, still held in Europe each year. Additionally, the MiceChat Gumball Rally is a yearly event at Disneyland, where fans compete to see who can ride the most attractions in a single day.

Not bad for a silly chase comedy hardly anyone recalls.

But for me, the movie is a nostalgic trip down memory lane that I take about once a year. I may not laugh as boisterously as I did at 13, sitting in the back row of that decrepit old Cinema V, but The Gumball Rally still brings a smile to my face. While this Blu-Ray from Warner Archive has no bonus features other than a trailer, this goofy old chestnut has never looked better on home video.

MEE-OW! LIKE TAUNTING A MOUSE TO DEATH
Posted by D.M. Anderson at 2:18 PM