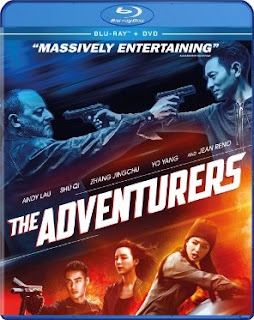 The Adventurers is as old school as its title.

Andy Lau is Dan Cheung, a legendary jewel thief who's just been released from a five-year stint in prison for stealing one of three rare jewels which make up an priceless Chinese necklace. He's greeted at the prison gate by beleaguered French detective Pierre Bissette (Jean Reno), who's convinced Cheung hasn't changed and will go after the other two stones.

Sure enough, Cheung and his crafty crew (Shu Qi, Tony Yang) plot elaborate heists - one in France, the other in Hong Kong - of the remaining jewels, with plans of fencing them to crime boss/mentor King Kong (Eric Tsang). Bissette, obsessed with nailing him, enlists the help of Amber Li (Zhang Jingchu), Chueng's angry, resentful former fiancée.

Sort-of a throwback to high-tech heist films of-old, The Adventurers walks a familiar path: elaborate break-ins, narrow escapes, sci-fi burglary toys; devil-may-care thieves & the dedicated cop; plot-twists, double-crosses and red herrings. We've seen it all before and even the surprises aren't really surprises. But it's well-constructed, light-hearted and moves along at fast clip. Lau, of course, is always fun to watch and makes a likable anti-hero. Likewise Reno, whose face and manner depicts a charming world weariness...and maybe some grudging respect for his adversary.

The Adventurers isn't really conducive to heavy scrutiny and the will probably fade from memory shortly afterwards. Like similar congenial crime capers, it's meant to be enjoyed in the moment, and in that respect, it succeeds rather nicely.