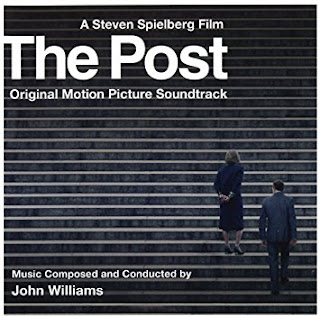 If I was John Williams, I'd have an ego the size of Gibraltar. After all, he's composed some of the most legendary scores of all time, which are just as iconic as the films they appear in. So it's a tribute to him that he still has the apparent humility to compose scores which don't call attention to themselves at all.

Williams' scores generally fall under two categories. There are the bold, sweeping, theme-ridden epics we all know by heart. Then there those like The Post, Williams' 28th collaboration with director Steven Spielberg. Not-yet having seen the film as of this writing, I can't tell the reader how effectively the score serves the film, but as an isolated listening experience, the music is pleasant enough, though not particularly dynamic.

Running a brief 40 minutes, this disc ebbs and flows from one track to the next (10 in total), their titles indicative of the scenes . Ironically the two most memorable tracks stray far from Williams' usual orchestrations: "The Oak Room, 1971" and "Two Martini Lunch" are short, laid-back pieces of piano-based jazz.

Elsewhere, it's incidental music obviously intended to enhance what's happening onscreen from a discreet distance. None of the remaining tracks stand apart from one another, though it's all unmistakably John Williams, whose earmarks are instantly identifiable.