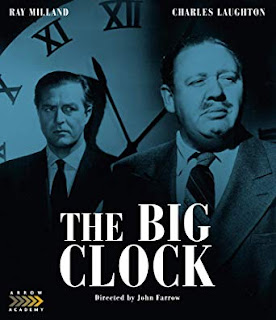 One of the great things about this gig is the opportunity to catch older films I somehow never got around to. Even better is coming upon those that are seldom mentioned among the acknowledged classics and are completely new to me. But best of all, in the ten years I’ve been doing this, I’ve grown to appreciate vintage film noir.

As noir goes, The Big Clock isn’t a perfect fit – there’s too much breezy humor present for that – but has enough of the same inherent aesthetic and narrative stamps to draw favorable comparisons to the best the genre has to offer. It also happens to be a hell of an entertaining film.

Ray Milland is George Stroud, who, as the editor-in-chief of Crimeways magazine, is an expert at using clues and evidence to track-down suspects who’ve eluded the police. The publication is run by ruthless, time-obsessed mogul Earl Janoth (a wonderfully-repellent Charles Laughton), who expects George to yet-again postpone an oft-delayed honeymoon with his wife, Georgette (Maureen O’Sullivan). When George refuses, he’s fired. Stopping at a bar before he meets his wife for their honeymoon, he meets Pauline (Rita Sullivan), Janoth’s former mistress who suggests a blackmail scheme as payback. Unfortunately, George loses track of time and Georgette leaves without him. Angry that she wouldn’t wait, George spends the rest of the night drinking with Pauline, acquiring a sundial from a local dive bar along the way.

He awakens at Pauline’s apartment the next morning and makes a hasty exit just before Janoth shows up to speak with her. They see each other in the hall, but George is partially concealed, so he gets away unidentified. During a heated argument in the apartment, Janoth kills Pauline with the sundial. Rather than go to the police, he turns to his assistant, Steve (George Macready), who suggests they re-enlist George and his staff to lead an investigation, hoping to frame Pauline’s ‘mysterious’ visitor. It’s a brilliant set-up for an intriguing plot in which George and his staff are investigating his own actions that night, interviewing witnesses and following leads which threaten to expose him. George has no choice but to play along, trying to cover his own tracks while attempting to find the real killer himself.

The Big Clock is everything a good thriller should be: intelligent, suspenseful and engaging right from the opening scene. Speaking of which, that amazing initial tracking shot – revealing George on-the-run in his own office building – immediately creates dark urgency, hooking the viewer before flashing-back to establish its characters and sequence of events leading to that point. But the film is more than brooding film noir. It’s often very funny, some of the best bits coming from Elsa Lanchester as a wonderfully eccentric artist. In fact, most of the characters are well-rounded and perfectly cast.

None of it is especially deep, but it’s sure a lot of fun. Though The Big Clock may not be film noir in the purest sense, it's an exciting, fast-paced film laced with great comedic touches. As usual, Arrow has put together a first-time Blu-ray package with enough substantial and enlightening supplementary material to make this overlooked gem more than worth discovering.

MEE-OW! LIKE BEING TURNED LOOSE IN A BIRD SANCTUARY
Posted by D.M. Anderson at 9:53 PM