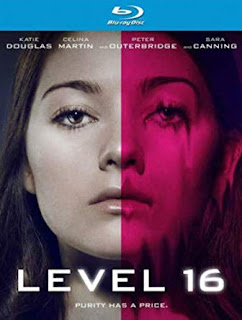 While Level 16 has the look and feel of a dystopian film, it doesn’t quite qualify as science-fiction. And despite being occasionally creepy, it isn’t really a horror film, either. But it does walk a narrative path frequently taken by both genres.

The Vestalis Academy is a boarding school where girls are raised and taught the virtues of cleanliness and purity, with the hopes of someday being placed with families once they graduate. However, anyone who questions authority, deviates from the school’s rigid daily routine (which includes taking their daily 'vitamins') or displays unclean behavior (such as anger) are severely disciplined. We never actually see any punishment, but it's apparently brutal enough to keep everyone fearful and submissive.

The story opens with Vivian and Sophia, two friends residing at Level 10 (Vestalis' "levels" correspond with the girls' ages). When Vivian tries to cover for a mistake made by Sophia, she’s dragged away. Fast-forward a few years and both are at Level 16, though no longer friends. Vivian (Katie Douglas) still hasn’t forgiven Sophia (Celina Martin) for betraying her, and asserts herself as the ‘top girl’ in the new dorm. Level 16 is the final stage before supposedly being placed with an adoptive family.

Right from the get-go, the viewer is certain Vestalis Academy isn’t a school at all, but that doesn’t necessarily make it predictable. Ruthless headmistress Miss Brixil (Sara Canning) and outwardly-empathetic Dr. Miro (Peter Outerbridge) have a more ominous agenda which I won’t reveal here. Despite a deliberate pace, writer-director Danishka Esterhazy does a fine job keeping our attention with interesting character conflicts, effectively stark production design and some dread-inducing moments. Whether Esterhazy’s big revelation is shocking or underwhelming depends on how many movies you’ve seen, but as they say, sometimes the journey is more important than the destination. Part of the fun of this one is discovering the school’s real purpose right along with Vivian.

Anchored by decent performances by a mostly young-adult cast, Level 16 is atmospheric and enjoyable enough that it can be forgiven for essentially being an extended Twilight Zone episode (though ultimately more gruesome). Considering its limited budget, this is a creative spin on a familiar concept. Not quite sci-fi or horror, fans of those genres still might want to check it out.