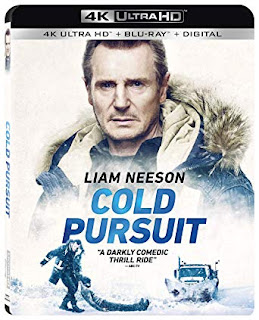 On 4K Ultra/Blu-ray from LIONSGATE

Liam Neeson has been channeling his inner Bronson for so long that one could be forgiven for assuming Cold Pursuit has him playing yet another one-man wrecking crew. But don’t let the generic title fool you. This is a highly amusing black comedy that just happens to have some great action.

Granted, as Nels Coxman, Neeson does exact a bit of bloody revenge over the death of his son, who was murdered by thugs on orders from smug, psychotic druglord Trevor “Viking” Calcote (Tom Bateman). And yeah, Nels plans to kill his way to the top of the food chain. But Nels isn’t ex-CIA or a retired super soldier. He’s just a grieving, angry snowplow driver. And even though he dispatches three bad guys in short order, Viking assumes it’s the work of a rival Ute mob run by White Bull (Tom Jackson). Striking back, Viking kills White Bull’s son, which triggers an escalating war.

Since I was unaware of director Hans Petter Moland’s original 2014 Norwegian version, In Order of Disappearance, I guess I was anticipating a snowbound Taken (which wouldn’t necessarily be a bad thing...Neeson’s an awesome senior-discount asskicker). However, the beauty of Cold Pursuit is how it consistently defies expectations. Neeson’s the star, of course, but the film is more of an ensemble piece loaded with interesting, sometimes quirky characters. Some appear for a scene or two, while others share nearly as much screen time as Neeson himself.

It’s hard to get into specifics without ruining many of the film’s surprises, but while there’s plenty of bullets ‘n’ blood, it’s just-as-often funny as hell, including a couple of priceless running gags related to the escalating body count. The humor is sometimes understated, sometimes broad and occasionally morbid. If Fargo was an action film, it might resemble something like this. But even without the eclectic characters and copious amounts of dark humor, Cold Pursuit’s plot is interesting enough that it could be presented straight and still remain fairly engaging.

Though it may not be the best film I’ve reviewed so far this year, it’s by-far the most fun. Criminally overlooked in theaters, this one deserves a second life on home video, definitely worth checking-out by both action fans and those whose sense of humor leans toward the dark side.

MEE-OW! LIKE TAUNTING A MOUSE TO DEATH.
Posted by D.M. Anderson at 8:54 PM