Paul Leni was part of the German Expressionist movement with a unique – and bleak – aesthetic style. After coming to America, he only made four films before his untimely death at the age of 44. However, his visual flair was a major influence on subsequent filmmakers, particularly early horror directors. Two of those films are now available on Blu-ray for the first time. 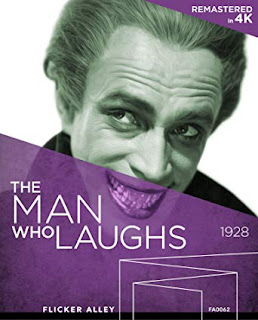 
On Blu-ray from FLICKER ALLEY

Opening like a brooding horror film, The Man Who Laughs drips with foreboding atmosphere even before the titular character shows his terrifying face. The first act is particularly unnerving, where King James II kills a Lord who slighted him, then orders the face of the man’s young son, Gwynplaine, to be disfigured by comprachinos (child buyers), giving him a permanent psychotic grin. Left for dead after the comprachinos are banished from England, Gwynplaine saves a blind baby from freezing to death before both are rescued and raised by Ursa, the kindly owner of a traveling carnival. As an adult, Gwynplaine (Conrad Veidt) becomes the star attraction billed as The Laughing Man.

But contrary to much of its imagery, the story unfolds as a romantic drama with Gwynplaine falling in love in Dea (Mary Philbin), the blind girl he once saved. She loves him, too, but because of his grotesque appearance, Gwynplaine doesn’t feel he’s worthy. Then insatiable duchess Josiana (Olga Baklanova) enters the picture with a fetishistic attraction to him, later complicated when reigning Queen Anne learns Gwynplaine is alive and the rightful heir to his father’s wealth, which Josiana is currently enjoying.

The plot is sort-of a cross between The Hunchback of Notre Dame and Freaks, but nowhere nearly as dark...or as compelling. The film is sometimes too meandering for its own good. Visually, however, The Man Who Laughs is very engaging. The atmospheric cinematography and production design give it a beautiful gothic look. Then there’s Gwynplaine’s disturbing grin (supposedly inspiring early incarnations of The Joker), which is potential nightmare fuel. Even so, it’s a credit to Veidt – acting almost entirely with his eyes – that Gwynplaine is sympathetic and endearing.

On Blu-ray, it’s hard to believe we’re watching a 90 year old film. Flicker Alley has beautifully restored it with a 4K remaster, enhanced by a brand new music score. 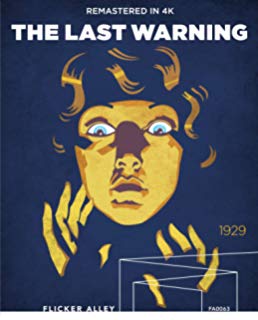 
On Blu-ray from FLICKER ALLEY

The remaster of The Last Warning isn’t nearly as impressive, probably due to the lack of a decent print to work with. But it, too, has its share of darkly atmospheric moments. The story itself is also more interesting, though  does end up resembling a Scooby Doo mystery.

In this one, famous actor John Woodward is murdered on stage while performing. After his body disappears during the investigation, the theater is closed. Five years later, Arthur McHugh (Montagu Love) decides to resurrect the play using the same surviving actors, including leading lady Doris Terry (Laura La Plante), the object of affection by Richard Quayle (John Boles). But it isn’t long before mysterious events happen, along with ominous warnings that promise death if the show goes on. Many of the cast and crew are suspects, some of whom believe Woodward’s ghost is the culprit.

For the most part, The Last Warning is a fun film, delivering some story surprises and a few remarkable visual touches (the theater’s “face” is particularly creepy). It’s faster paced than The Man Who Laughs, the tone a little less serious. Unfortunately, the remaster for this one couldn’t do much about the dilapidated picture quality, which is often murky and filled with scratches and blemishes. The new score, however, is terrific.

Though neither is a horror film, Leni’s visual aesthetic was a huge influence on the genre. From a historical perspective, The Man Who Laughs is essential viewing for fans of the genre’s history, as it establishes a look that would be imitated for decades. The Last Warning isn't as visually compelling but has a more entertaining story. If forced to choose, I'd pick the former, mainly because it the Blu-ray transfer is far better.
Posted by D.M. Anderson at 9:48 PM