EYES OF LAURA MARS and GHOSTS OF MARS

Throughout his career, John Carpenter had a fairly cantankerous relationship with Hollywood. With the possible exception of The Thing, most would agree his best films were those he made independently, with considerably more creative freedom. So while these two Blu-ray releases from Mill Creek Entertainment aren't the greatest things to bare his name, they make interesting bookends to Carpenter’s tumultuous tenure within the studio system. 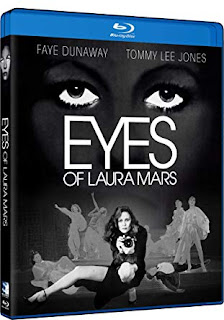 On Blu-ray for the first time, Eyes of Laura Mars is almost like opening up a time capsule.

Released just-prior to his landmark Halloween, Carpenter didn’t actually direct this one, but wrote an early draft of the screenplay, later reworked by David Zelag Goodman. While it provided Carpenter his first real credit in a major studio picture, it’s obvious he had little creative input beyond the initial draft.

Faye Dunaway plays the titular character, a famous fashion photographer whose work consists of controversial images containing kinky violence. Then someone starts killing those close to her, and each time, Laura is able to witness these murders - as they’re occurring - through the killer’s eyes. Detective John Neville (Tommy Lee Jones) is on-hand to investigate the murders (and eventually hop in the sack with Laura).

Despite its supernatural premise, Eyes of Laura Mars is not-so-much a horror movie as it is an exercise in disco-era excess, with far less attention paid to its story elements than the wardrobe, soundtrack and Laura’s silly S&M-tinged photo shoots. The identity of the killer will come as a complete surprise, mainly because the film is stuffed with red herrings without providing a single real clue. Carpenter's name may be among the credits, but nothing else he'd become famous for.

Still, Dunaway is good in one of her last substantial roles during her reign as a leading lady, while its kitschy aesthetics serve as an amusing glimpse into the past. 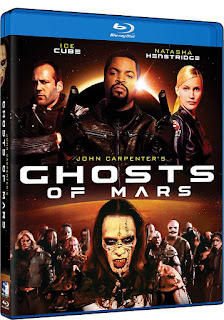 
On Blu-ray from MILL CREEK ENTERTAINMENT

On the other end of the spectrum, Ghosts of Mars is the last Carpenter film backed by a major studio (and he’s directed only one more since). It was a box office flop when released and regarded by many fans as one of his worst films. Even today, it doesn’t enjoy the cult status of his other work.

While it isn’t great, Ghost of Mars is not his worst (I’d say Village of the Damned and Memoirs of an Invisible Man tie for that dubious distinction). In fact, now that the Martian dust has settled and initial expectations have long-since been dashed, perhaps a bit of reassessment is in order.

As a longtime Carpenter fan, I, too, was massively disappointed at first, especially after hearing it began life as another Snake Plissken sequel. But watching again after all these years, knowing what to expect, Ghosts of Mars isn’t without its virtues. First of all, the film has an absolutely killer soundtrack. Featuring Carpenter and a variety of hard rock heavyweights (including Steve Vai and members of Anthrax), the abrasive, industrial-tinged score perfectly suits the action. Speaking of which, the film may not be has atmospheric as Carpenter’s best work, but at least this movie moves, with plenty of close-quarters combat and bloody violence.

While the performances are merely adequate, Ice Cube is entertaining as Desolation Williams, even though we suspect he isn’t really trying all that hard. And I have to say there are a few gags - depicting the utter stupidity of Williams’ gang – that are as funny as anything Carpenter ever created for his other films.

As a writer-director, it does feel like Carpenter is simply going through the motions at this point in his career. Ghost of Mars remains one of his lesser films, but I kind-of enjoyed it the second time around.

Eyes of Laura Mars marks John Carpenter’s inauspicious introduction to Hollywood, while Ghost of Mars stands as his nadir, after he’s been chewed up and spit out by the system. In between, of course, are all the cult classics that bare his name. Neither of these two films are essential, but rather interesting from a historical perspective, especially for Carpenter completists.
KITTY CONSENSUS: