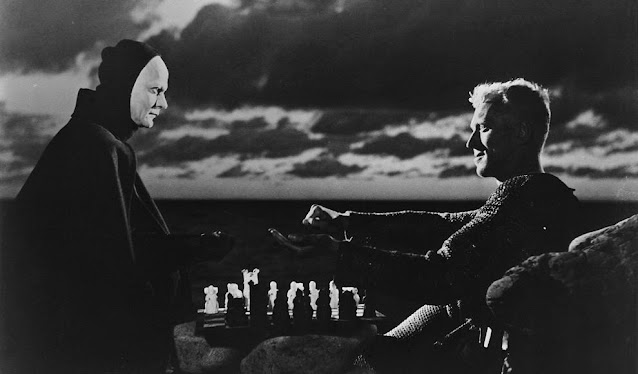 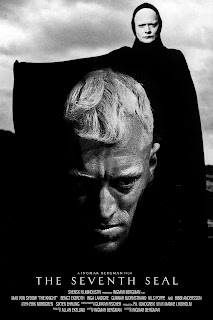 I was today-years-old when I discovered the greatness of The Seventh Seal.

There ain’t a movie lover alive who’s seen everything, though never for a lack of trying. But there are those films generally considered required viewing for any self-respecting cinephile...influential classics, Oscar winners, cinematic milestones and, of course, the ones widely lauded by critics and scholars alike as some of the greatest ever made. You know...like Porky’s.

During my five decades (and counting) of living vicariously through the silver screen, I’ve managed to see a lot of them, sometimes out of curiosity, sometimes out of a sense of obligation and occasionally just to show-off my highfalutin cinema smarts. It doesn’t really matter that nobody I know has ever been impressed by my efforts. To the wife, my growing batch of Criterion Collection titles - home video’s version of overpriced imported beer - simply means less room on the shelf for her Anne McCaffery novels.

But alas, I still have that list of canonical films that I’m forced to admit I haven’t yet seen...The Battleship Potemkin, On the Waterfront, Barry Lyndon and Dr. Zhivago are just a few titles on that "List of Shame." Actually, I tried to sit through Zhivago once, which turned out to be a better sleep aid than NyQuil. Some so-called classics are obviously not worth the effort, but of course, you can’t know that until you commit to a film. That’s often why, when faced with the prospect of catching Gandhi for the first time or firing-up a fat one to revisit The Angry Red Planet...sorry, Sir Kinglsey. Gandhi may have deserved its eight Oscars, but I’m pretty sure the titular character doesn’t confront any giant one-eyed amoebas. It would be a great fight, though.

One film I did recently manage to scratch off the "List of Shame" is 1957’s The Seventh Seal. It’s my first Igmar Bergman film and the first time I’ve heard Swedish that wasn’t parodied by a culinarily-challenged Muppet. If the title doesn’t ring a bell, certainly its most iconic image does: a knight on the beach engaged in a chess match with Death himself. The Seventh Seal’s depiction of Death has-since had a sweeping influence on how it’s personified in film, perhaps most amusingly in Bill & Ted’s Bogus Journey. That-alone compelled me to finally sit down and try powerIng through it. Even though the film looked relentlessly bleak, to say nothing of pretentiously arty, I felt like my status as a card-carrying cinephile was at stake.

But The Seventh Seal was not what I expected.

Antonius Block (Max Von Sydow) is a weary knight returning home from the Crusades with his squire, Jöns (Gunnar Björnstrand). A decade of fighting has him questioning whether or not God even exists, a feeling exacerbated by the Black Plague, which is rampaging through the country. When Death (Bengt Ekerot) comes for him, Block doesn’t really seem surprised, calmly declaring “My body is afraid, but I am not,” which I took to mean “You can’t tell by looking at me, but I just shit my armor.” At any rate, Block isn’t quite ready to go because he has unfinished business...to seek proof of God’s existence.

Being something of a chess whiz, he challenges Death to a game in order to stave off the inevitable. That scenario had me wondering what game I’d choose if my own life was at stake. I came to the alarming realization that I’m not particularly skilled at anything competitive. I used to play soccer, but that was 40 years and 30 pounds ago. For a brief time, I also considered myself a decent poker player, often lightening relatives’ wallets during family get-togethers. But when my wife and I vacationed in Vegas a few years back, I bought a seat at an actual tournament and was eliminated in 30 minutes (but at least I beat the old fart wearing a MAGA hat).

A majority of the film has Block and Jöns making their way across the plague-ravaged country, picking up a few folks along the way, most of whom appear to be in Death’s crosshairs, as well. Still no sign of God, though Jöns has a few great scenes where he inflicts some well-deserved payback on Raval, a former holy man who once talked him and Block into joining The Crusades in the first place. Now, however, Raval is a thief who goes around stealing valuables from the bodies of the dead. When Jöns first accosts him, Raval’s in the process of adding rape to his list of new skills. Later, Raval is seen tormenting Jof (Nils Poppe) for no reason other than the man’s a traveling actor and therefore beneath contempt.

Now if that actor was someone like Jared Leto, it would be understandable, but Jof is the film’s most likable and congenial character. More significantly, he’s the only one whose faith in God remains unshaken. In fact, the only problem I have with Jof is how he and his wife, Mia (Bibi Andersson), let their kid run around without pants throughout the entire film. I have a sister-in-law who’d allow her boys to parade around naked all the time, which made one particular camping trip an uncomfortable experience, especially since they were 5 and 7 at the time, well-past the age when seeing junior's Johnson is even remotely amusing.

At any rate, Jöns carves up Raval’s face but doesn’t kill him. The film has a more befitting fate in-store. Raval is an interesting character because of what he represents to me. As I write this, COVID-19 is not-only still rampant, but solidifying the sharp divide between those taking it seriously and legions of science-denying dumbfucks who feel it’s their God-given right to risk infecting others by dining at Applebee’s. And a lot of ‘em are egged on by zealous evangelical leaders who'd rather name-drop God than Anthony Fauci. So even though thousands are still dying every day, these assholes continue to pack themselves into megachurches, get willfully fleeced and marginalize anyone who isn’t Christian, white and heterosexual.

After goading soldiers to fight in God’s name, lining his own pockets by robbing the dead and tormenting a man simply for being different, Raval is seen in the death-throes of the same plague he once took advantage of. It’d be fucking awesome if the same fate befell the likes of Joel Onsteen, Peter Popoff and Jerry Falwell Jr. So in one aspect, The Seventh Seal could be seen as one hell of a karmic revenge fantasy.

Meanwhile, the chess match continues, as does Block’s quest to learn of God’s existence. It’s a narrative that’s structurally similar to Voltaire's Candide (I just knew being forced to read it in college would pay off someday). The revelations are found in the journey itself, even if we don’t realize it at the time. Though the journey ends at Block’s castle - where his wife awaits - Block ultimately learns the answer to his question during the final moves of the chess match, when he uses a childish-yet-effective tactic to distract Death from his task. I wouldn’t dream of giving away what that is, but Block’s expression tells us his quest is over.

That was my takeaway, but I could be full of shit in my assessment. One of the cool things about The Seventh Seal is that it can be interpreted completely differently, such as being an incendiary condemnation of organized religion. Or it could be a cautionary tale about the deadly folly of blind faith. Or maybe it simply suggests challenging Death to a game of Monopoly would be a better idea, since that fucking game always goes on long after it stops being fun and there’s a 50/50 chance Death would rage-quit before finishing.

What I didn’t expect was how entertaining the film turned out to be. Sure, The Seventh Seal is often dark, perplexing and just a tad pretentious, but there are also moments when it’s surprisingly sweet-natured and light-hearted, even funny at times. Jöns is particularly amusing, especially his cynical views of religion and the so-called sanctity of marriage. But the film is filled with a lot of other great characters, each fleshed-out with their own interesting quirks. Even Death displays a bit of playful arrogance. Ironically, the one character we learn the least about personally is Block himself, who might be more-intended to embody the ol’ crisis-of-faith many people face than a flesh & blood human being.

Even without one-eyed space amoebas, The Seventh Seal turned out to be a great film, easily the best thing to hail from Sweden since I bought my first Opeth album. Not-only can I cross it off my "List of Shame," the film might even find a place among my top 100 (yeah, I’ve got one of those, too).
Posted by D.M. Anderson at 3:52 PM