THE DARK AND THE WICKED is Aptly Named 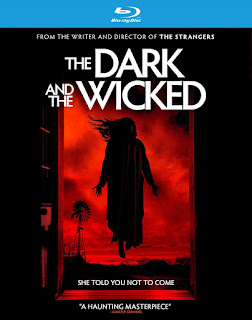 Until this film, I’ve been largely unimpressed with writer-director Bryan Bertino. The Strangers has more than its share of fans, though I failed to see what was so super-duper about it. And I hated The Monster, which was alternately dull and depressing. As for Mockingbird...well, it’s found footage, which almost always sucks.

However, The Dark and the Wicked is excellent, where Bertino finally strikes just the right balance of atmosphere, dread and shocks that his other films lacked.

Louise (Marin Ireland) and Michael (Michael Abbott Jr.) are two semi-estranged siblings who arrive at their parents’ goat farm to visit their dying father. Mom, who’s behaving strangely, doesn’t want them there and repeatedly implores them to leave. After she hangs herself in the barn, they soon learn why. Louise finds Mom’s diary, which chronicles the terror she and Dad have been subjected to by an unseen entity, presumably the Devil.

They initially think she simply went mad, at least until they become similarly tormented while caring for dear ol’ Dad. They’re threatened by a wide variety of terrifying hallucinatory visions and demonic assaults, while the hired help are coerced into killing themselves. And sorry, animal lovers, not even the goats are spared Satan’s wrath.

Playing sort of like The Evil Dead on downers, there ain’t a hell of a lot of originality, but the film is perfectly paced, emphasizing mood over shocks (though it’s sometimes extraordinarily brutal). Bertino provides just enough exposition to suck us into the story and make us care about the characters. Speaking of which, Ireland and Abbott resist the temptation to overplay their roles, convincingly conveying quiet desperation and helplessness.

One aspect the film does share with The Strangers is a grim sense of inevitability that hangs over everything. There aren’t any real narrative surprises, nor does Bertino try to throw us any. The Dark and the Wicked is more about the journey than the destination, and as such, it’s a trip worth taking for fans of haunting, atmospheric horror.