BLADE Brings the Darkness to 4K 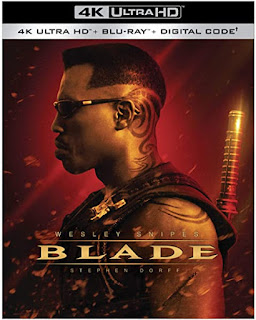 Black Panther may have been the first African-American comic book hero, but Blade beat him to the screen by nearly two decades. And though Logan and Nolan’s Batman Trilogy defined the term to the masses, Blade was dark & gritty long before it was fashionable.

Maybe it’s just me, but it seems like Blade doesn’t get enough credit for how groundbreaking it really was for the time. Despite some visual effects that might seem a bit archaic today, it’s still a ton of kinetic, kick-ass fun and provided the first convincing argument that the superhero genre wasn’t necessarily kiddie fare.

The story itself remains compelling, with Wesley Snipes as the titular anti-hero - half-human-half vampire - who has it in for Deacon Frost (Stephen Dorff), a cocky young bloodsucker plotting to end the human race by awakening an ancient Blood God. Also interesting is the complex and powerful vampire organization that exists beneath our noses. I only wish that aspect of the narrative was explored in a little more detail, rather than just tease us with glimpses of this intriguing underworld.

Another thing that elevates the film are the performances. Snipes has never been what I consider a great actor, but the role suits his unique ability to grunt and sneer his way through a script, which is probably why the Blade franchise ended up being the high point of his career. As the main antagonist, Dorph is good, though his sidekick, Quinn (Donal Logue), is more entertaining. His repeated beatdowns at Blade’s hands - not-to-mention his sword, a flash grenade and a speeding subway - is a great running gag.

Elsewhere, Blade has a unique look, sound and tone, with sharp direction by Stephen Norrington (whatever happened to him?), creative production design and effective use of nighttime LA locations. Speaking of which, I still don’t think 4K is suitable for every movie, but the transfer for this one is excellent, especially noticeable during the night sequences, which is most of the running time. It does, however, tend to render the already questionable CGI a bit more wonky.

Other than that, Blade has held up pretty well over the years and is certainly worth checking out by younguns weaned on the likes of Hellboy and Deadpool (though it’s far less comedic). For old school action buffs who remember their history, this 4K release makes it look and sound almost brand new. As “dark” comic book films go, Blade may not be one of the best, but it is one of the first.

FEATURETTES (Blu-ray) - “La Magra” (interviews about how the film was developed and produced; includes deleted scenes and an alternate ending [though the FX are unfinished]); “Designing Blade” (production design, special effects, costumes & weapons); “Origins of Blade: A Look at Dark Comics” (Screenwriter David S. Goyer, Marvel’s Stan Lee and magazine editor Gareb Shamus discuss the evolution of comics toward darker themes); “The Blood Tide” (kind-of a cool doc about the role of blood in history, literature and culture).