THE GODFATHER, CODA: THE DEATH OF MICHAEL CORLEONE Pulls You Back In 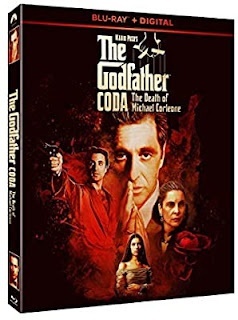 This marks the third time in the last couple of years that Francis Ford Coppola has decided to tweak one of his old films. But unlike George Lucas, he’s had good reason to. Apocalypse Now Final Cut is now as close to perfect it’s ever gonna get, while The Cotton Club Encore is longer and more narratively cohesive. So it comes as no surprise that he’d set his sights on the most maligned chapter in the Corleone saga.

The Godfather & The Godfather Part II remain the greatest one-two punch in movie history. Even today, they’re supreme examples of timeless storytelling and provide a strong argument that the 70s may have been Hollywood's true Golden Age. If you don’t agree with this assessment, you’ve obviously never seen them.

As for The Godfather Part III...well...

There was once an NFL quarterback named Archie Manning. Two of his sons, Payton and Eli, not only became NFL quarterbacks themselves, but won two Super Bowls each (something even their dad couldn’t accomplish). Archie’s third son, Cooper, never got any closer to a pro football career than being a broadcaster on Fox Sports (I’ll bet those family reunions are awkward). If director Francis Ford Coppola is cinema’s Archie Manning, creating his own Payton & Eli with the first two Godfather films, then Part III is definitely his Cooper.

That ain’t a slam against Cooper Manning or Godfather III. Cooper was also a talented ballplayer with a promising football future before nerve damage cut his career short. The Godfather Part III, despite a lot of retro-hate thrown its way, is actually an excellent film. It simply doesn’t compare to the first two because a third chapter was never really necessary. It was also made for the wrong reasons and probably a decade too late.

But even though Coppola needed the money, The Godfather Part III never played like a cynical cash-grab. He and original author Mario Puzo obviously put a lotta love into its complex story (inspired by real events happening at the time the film takes place), while cinematographer Gordon Willis returned to give it the same unique look as the other two. Coppola managed to squeeze-in as many familiar characters as possible and nabbed most of the surviving original cast. Even some of the new characters, like Andy Garcia as Vincent Corleone, fit right in with the old guard. The film wasn’t without its faults, most notably the infamous miscasting of Coppola’s daughter, Sofia, in the pivotal role of Mary. Additionally, Robert Duvall was sorely missed and simply replacing him with George Hamilton was like The Beatles deciding to fire Paul McCartney in favor of Gene Simmons.

But all-in-all, it was a solid film, arguably Coppola’s best since Apocalypse Now, though certainly not perfect.

Now we have a new cut, retitled The Godfather, Coda: The Death of Michael Corleone, which is what Coppola wanted to call it in the first place. While the film still has flaws that keep it from being mentioned in the same breath as the first two, is it at-least an improvement? In many ways, yes. The new title is definitely more accurate. From a narrative standpoint, it never quite worked as a stand-alone story because Coppola never intended it to. Most of the other changes are subtle, and if you’ve only seen Godfather III once or twice, perhaps unnoticeable.

There’s no new or restored footage. In fact, this cut actually runs a few minutes shorter. However, Coppola has re-edited the film by rearranging certain sequences, trimming some scenes and completely removing others (such as the entire opening, where Michael is being honored by the Catholic Church). Most of the changes occur during the first and final acts - including the ending - meaning the basic story and all its threads remain intact. So while Godfather Coda is not a director’s cut or special edition, it does play more like the tragic epilogue Coppola and Puzo always meant it to be.

The result is a better overall film. Whether or not one agrees is one of the fun debates that makes The Godfather, Coda: The Death of Michael Corleone worth checking out. Additionally, the Blu-ray transfer is excellent; both the picture and sound are huge improvements over any previous Godfather III release. For lovers of all-things-Corleone, this is a disc you can’t refuse.