11 Hilarious Scenes From the House in A CHRISTMAS STORY 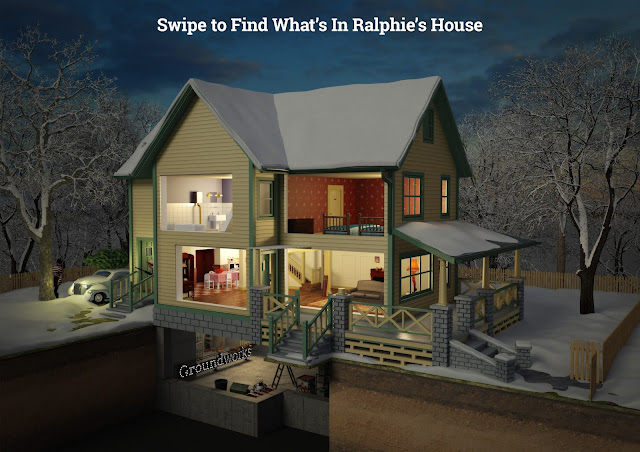 A Christmas Story is one of the most popular Christmas classics out there. It’s been on many “Top Christmas Movies of All Time” lists, including lists from AOL and IGN. Today, millions of people will likely watch A Christmas Story and appreciate the nostalgia it brings. Here are 11 of the hilarious scenes you’ll be able to enjoy from the house in A Christmas Story.

The Bunny Suit -  Among the presents that Ralphie gets is a particularly unflattering one: a hot pink bunny suit from his overbearing Aunt Clara. Ralphie’s mom thinks he looks adorable, but neither Ralphie nor his father are amused, with his father stating that he looks like a “deranged Easter bunny.”

Red Ryder BB Gun -  The one thing that Ralphie wants for Christmas is a Red Ryder BB gun. However, friends and family around him taunt him with the now-infamous quote, “You’ll shoot your eye out!” He does finally receive his BB gun as the last present on the pile.

Neighbors’ Hound Dogs -  Ralphie’s family lives next to the Bumpus family, a group of hillbillies who own, as Ralphie puts it, “at least 785 smelly hound dogs.” Those hound dogs cause serious trouble on Christmas, when they eat the family’s turkey and cause them to have to go to a Chinese restaurant for Christmas dinner.

Well-Lit Christmas Tree -  The family takes some time to haggle over a great price for a Christmas tree, then takes it into the home and displays it in the window. They decorate it with all sorts of lights. However, the electricity usage fries the outlet, causing the lighting to stop working.

Leg Lamp -  Before the Christmas tree goes in the window, a leg lamp takes up a place of honor in it. The leg lamp is a contest prize that Ralphie’s dad wins. However, Ralphie’s mom isn’t too happy about it, which ends in her “accidentally” breaking the lamp.

Furnace Soot -  At one point, the home’s furnace starts blowing soot through a hot air duct in the kitchen. Ralphie’s dad attempts to go down into the basement to check on it, but steps on a pair of skates and tumbles down the stairs. He unleashes a “tapestry of obscenity” that Ralphie takes note of.

Hubcap and Lugnuts -  When the family’s car gets a flat tire, Ralphie volunteers to help fix it. However, when he drops the lugnuts he was going to use to help fasten the tire to the car, he says a swear word – the “queen mother of dirty words,” according to him.

Bathroom Soap - When his mother hears him saying the naughty word, she washes his mouth out with soap. He makes a comment that he’s become “quite the connoisseur of soap” and has a melodramatic dream that night about dying of soap poisoning.

Ovaltine Decoder -  Ralphie drinks lots of Ovaltine to get the Little Orphan Annie Secret Society decoder. When he finally receives the decoder, he excitedly decodes the secret message, only to realize that it’s just a commercial to drink more Ovaltine.

BB Gun Mishap -  After receiving the BB gun that he’s excited about for Christmas, Ralphie sets up a BB gun practice in his backyard. The BB gun ricochets, hitting Ralphie’s glasses and causing him to worry that he really has shot his eye out.

Black Bart Attacks -  Ralphie fantasizes about being able to defend his family from bandits in a cowboy-esque shoot ‘em up scene that involves a bandit called Black Bart. He shoots these bandits and scares them away with his BB gun.

There are many incredible scenes from A Christmas Story. Many of these scenes are scenes that people quote all the time, whether or not they’ve seen the movie recently. No matter why you’re quoting or trying out scenes, this watch of A Christmas Story can definitely be a great one if you pay some more attention to it.
Posted by D.M. Anderson at 10:02 AM