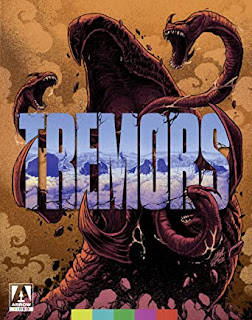 That's a rhetorical question, of course, because everybody loves Tremors...now, anyway.

Forget the plethora of unnecessary - and generally awful - sequels. Like Jaws, the concept is really only fresh the first time and the original is just as freaky and funny as it was 30 years ago.

Has it been that long, already? I remember seeing Tremors during its opening weekend. My wife and I went with another couple, though I was the only one who actually wanted to see it. Reflective of its lackluster box office performance, hardly anybody else was in the theater. However, the film was a wonderful surprise (even to my wife & friends) and a relative rarity among killer creature features...solid direction, smart writing, engaging characters, great performances and monsters that are both scary and amusing.

But it’s the humor - especially the quotable dialogue - that truly elevates the film. However, Tremors isn’t so-much a comedy as it is a horror film that just happens to be very funny, never descending into parody or heavy-handed self-awareness over the ridiculousness of its concept. That we’re more-than-willing to accept the premise without being handed any explanation for the Graboids’ existence is part of what makes it so endearing.

So of course it became a classic. Like The Shawshank Redemption’s latent popularity, everyone simply showed up late to the party. Today, you’d be hard-pressed to find anyone who doesn’t flash a shit-eating grin at the mention of Tremors. Claiming to hate the film is sort-of like saying out-loud that you dislike Muppets...or The Beatles...or pizza.

Best of all, Tremors has aged remarkably well, both technically and aesthetically. It’s been released on Blu-ray before - numerous times - but never quite like this Limited Edition box from Arrow Video. In addition to the terrific 4K restoration, the set is loaded with a ton of entertaining bonus material, much of it brand new. Though Fred Ward is unfortunately absent (we get Jamie Kennedy instead?), just about everyone else who was essential to the film’s success are featured in revealing interviews, from it’s conception through it’s disappointing theatrical run and eventual popularity on home video. Collectively, we get the entire story behind Tremors. 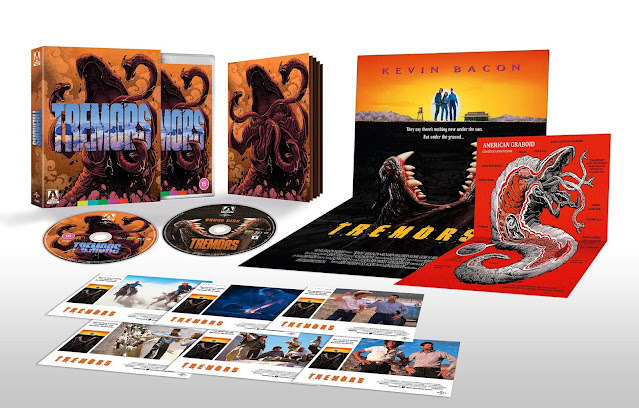 The set is also beautifully packaged, featuring new and original cover art. Like other recent Limited Edition Arrow releases (such as Robocop and Beyond the Door), it’s packed with posters, lobby card replicas and a nicely designed supplementary book - not a booklet! - with essays & photos.

Not too shabby for a movie almost nobody saw 30 years ago. This edition of Tremors is easily Arrow’s best release this year and as close to a definitive version as we’re likely to get. It’s worth grabbing by anyone who loves the film (which is, of course, everyone).

THE TRUTH ABOUT TREMORS - Interview with producer Nancy Roberts

AFTERSHOCKS AND OTHER RUMBLINGS - Interview with producer Ellen Collett

PARDON MY FRENCH! - An amusing series of side-by-side comparisons between scenes containing profanity and their edited-for-TV versions.

2 SIDED MINI-POSTER - Featuring a “Welcome to Perfection” sign and a diagram of Graboid anatomy.

MEE-OW! LIKE TAUNTING A MOUSE TO DEATH.
Posted by D.M. Anderson at 1:12 PM