ALIEN and the Insatiable Compulsion 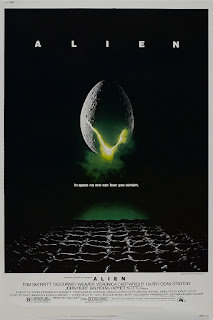 My youngest daughter, Lucy, and I recently exited the theater after watching Alien Covenant, the sixth film in the ongoing franchise (sorry, kids, the scrotum-sucking AvP movies don't count). We concurred that, while well made and certainly an enjoyable night at the movies, there was nothing particularly special about Alien Covenant. In fact, we both enjoyed the recent Alien rip-off, Life, a bit more. Perhaps because our expectations weren't as lofty for that one, or just maybe, facehuggers & chestbursters have lost most of their luster over the years.

As hard as it might be to fathom today, Ridley Scott's original 1979 film was really unprecedented. The plot may have directly ripped off a forgotten cheapie from 1958 (It! The Terror from Beyond Space), but Alien was so atmospheric, unpredictable, scary-as-fuck and shocking that it became a cinema milestone. In an era when the likes of Spielberg & Lucas had us cooing over any cuddly creature hailing from another world, here was one that was vicious, loaded with teeth, almost indestructible and existed for the sole purpose of slaughtering anything with a pulse. The film's infamous "birth" scene is as iconic as the first shark attack in Jaws and as unexpected as Marion Crane's death in Psycho.

Back in '79, watching that scene for the first time in a theater with a couple of buddies, we knew we were in for something bad when Kane (John Hurt) started choking and convulsing at the dinner table. After all, a nasty, acid-blooded spidercrab had recently attached itself to his face and shoved a slimy phallus down his throat, which was horrific enough. But even that didn't prepare the audience for what came next, when the most awful creature in horror history exploded from Kane's chest, showering his stunned crewmates in blood. I jumped from my seat and screamed, sending popcorn flying. The entire theater did. The last time I experienced a collective scream of that magnitude was when the shark in Jaws popped from the water to say hello to Martin Brody. One lady even ran from the theater, hand clasped tightly over her mouth. Back then, absolutely nobody saw this scene coming. Anyone claiming otherwise was lying their ass off.

But Alien's disturbingly imaginative concept is really terrifying only once, like losing your virginity. You simply can't do it again and expect the same visceral experience you had the first time. James Cameron knew this, which is why he went the sci-fi-action route with his sequel, Aliens, the only film in the franchise as highly regarded as the first, and justifiably so. Every sequel afterwards was simply more of the same. Decades later, not even Ridley Scott himself could think to do anything more creative than make origin stories, which our beloved xenomorphs absolutely do not need. Sure, Prometheus and Alien Covenant are interesting, but what made these critters truly terrifying in the first place was their simple malevolence and horrifying method of reproduction. Giving them a history sort of demystifies their existence.

On the plus side, I must shoot some kudos Scott's way for bringing back one element of realism that's been missing from the franchise for a long time, which my daughter was sharp enough to point out. Referring to an early scene in Alien Covenant when a character decides to poke a bulbous object that releases microscopic, body-invading spores when disturbed, she remarked, "Why would he poke it? How could anyone visiting an alien world be that stupid?"

A good point, to be sure, but foolishly fucking with something strange is a time-honored sci-fi trope. In the original Alien, when Kane first ventures into the bowels of a derelict spaceship and sees thousands of eggs, the very first thing he decides to do is touch one, without pausing to ponder if that's a good idea. As he learns the hard way, it turns out to be a truly shitty idea. In fact, in the entire history of sci-fi films, not once has touching, poking or prodding a foreign object ever ended well, be it an egg, meteor, puddle of slime, pulsating orb, sexy alien babe or something swimming in a petri dish.

But what makes scenes like this effective is what they say about the human condition. More than a simple plot device, Kane's first encounter with the egg is arguably the most realistic scene in the entire film. For all its grandeur and existential ideas, Scott's first prequel, Prometheus, was sometimes criticized for featuring some idiotic characters, most notably two dumbasses who try to touch a slimy, eel-like creature as though they're visiting a petting zoo. Yeah, it's a fatally dumb decision, but one that accurately reflects real human behavior...more specifically, male behavior. In movies, it's no accident that the character who chooses the hands-on approach is almost always a guy, usually an arrogant or cocky one.

Early in our marriage and not exactly rolling in cash, my wife, Francie, and I celebrated an anniversary by camping. Growing up in a family whose idea of a good time is to be outdoors, this was her fucking idea. For a city boy like myself, roughing-it means staying in a hotel without cable TV. But I was young, in love and willing to attempt survival without the conveniences which make life tolerable. So, armed with a tent, sleeping bags and sunblock, we ventured to a nearby campsite in Eastern Washington.

For those who picture the Pacific Northwest as a mountainous wooded wonderland, that's only west of the Cascades (where I grew up). Most of eastern Washington (Francie's old stomping ground) is as flat, hot and dry as Tatooine. It's bad enough driving through this barren wasteland; camping there is an exercise in masochism.

On one of these blistering days, we decided to take a walk. While crossing a field, we noticed something scurrying through the grass about twenty feet ahead. Thinking it might be a snake or something, Francie wisely exercised caution. I, on the other hand, did what any full-functioning male of my species would do in the same situation: look around for something to poke it with.

Armed with a small stick, I stealthily approached and proceeded to tap the critter into action. Suddenly, a noisy, quivering tail stuck straight up through the grass. It wasn't just a snake, but a rattlesnake and none-too-pleased with my company. I dropped the stick and ran, squealing like petrified piglet. The damn thing chased me about ten feet before giving up (angry snakes are a lot faster than I once thought). I suppose I was lucky because we were practically in the middle of nowhere. If I'd been bitten, no way could Francie have hauled my dumb ass to the nearest ER.

What did I learn from this self-instigated encounter with the dark side of nature? Not a damned thing. Given the chance, I'd probably do it again, albeit with a much bigger stick.

That's how most guys are wired. The compulsion to disturb something potentially dangerous is part of our DNA. Sure, we'll whack that hornet's nest! Hey, let's chase that skunk, lick that toad and taunt the neighbor's pitbull! Don't worry, honey, that venomous reptile can't hurt me! I'm armed with a twig!

What's the worst that can happen?

Perhaps when we laugh at those dumbasses in sci-fi movies who stupidly play around with something they don't understand, guys in the audience are really laughing at themselves. After all, the funniest jokes are those with an element of truth to them. So when Kane seals his fate by messing with an alien egg, it's more than a simple story contrivance. In each of the Alien films he's directed, Ridley Scott taps into the male psyche and shows us human instinct in action.

Rewatching the original Alien with Lucy a few days later, she made another quip about never poking stuff in space. Since it's never boded well for any character in movie history, it's an acute observation. However, if I were in Kane's shoes, I must admit I'd still probably do the same thing.