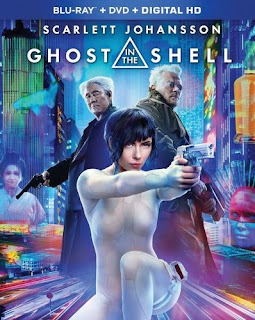 It ultimately boils down to how well a viewer can judge a movie on its own merits, not where it came from. This is especially true for films like Ghost in the Shell, which was a long time coming and probably burdened with more pre-release baggage than any mainstream film since Ghostbusters.

As someone almost completely unfamiliar with the original manga series or 1995 anime it's adapted from, I had no preconceptions, expectations or comparisons while reviewing this film. I couldn't care less if the film is a faithful adaptation, just like those who continue to praise The Shining even though it's a complete bastardization of the novel. All that really matters is whether-or-not Ghost in the Machine works as a singular live action sci-fi movie.

First and foremost, Ghost of the Shell is visually stunning. There's nary a single scene that isn't interesting to look at, from the elaborate production design, colorful imagery, convincing visual effects, creative costumes...right down to the imaginatively rendered cybernetic characters. From a purely aesthetic standpoint, this is Blade Runner on crack. That alone is probably enough to make the film worth checking out at least once. Additionally, the numerous action sequences are well-executed and - somewhat surprisingly - mostly free of the hyperkinetic editing style utilized to amuse those with ADHD. If nothing else, Ghost in the Machine is a technically impressive piece of work.

But despite a nifty idea - a future where most humans are physically augmented by cyber-technology - the story itself isn't all that involving. Scarlett Johansson plays Major Mira Killian, whose brain has been transplanted into a mechanical body after a supposed terror attack. The company that created her, Hanka Robotics, use her as a weapon against cyberterrorism. Mira also begins seeing images that were supposedly wiped from her memory. Meanwhile, several of Hanka's bigwigs are being murdered by Kuze (Michael Carmen Pitt), one of the company's earlier failed experiments. However, when Mira finally confronts him, she learns more about her previous life than originally told, leading her to question her own humanity and purpose.

I don't know how faithful the story is to the original manga, but the underlying theme - technology's impact on personal identity - was explored more effectively in films like Robocop. There's a lot of gunplay and acrobatic combat, but no real depth or narrative surprises (not helped by trailers which essentially gave away its biggest twist).

With the possible exception of Kuze, none of the characters are particularly interesting. There's been a lot of outcry over the casting of Johansson, superficially made up to appear more Asian. But the real problem is, though she's physically capable and looks great in a body suit, she does nothing to distinguish Mira from her similar roles in Lucy or The Avengers.

But as someone with no expectations going in, while I found Ghost in the Shell narratively unremarkable, I wouldn't exactly call it a disappointment. In fact, I have to admit it's better than the aforementioned trailer suggested, Perhaps I'd think differently if I cared about its history, but as a stand-alone movie experience, the visuals alone are enough to make it worth catching at home, preferably on a huge screen.