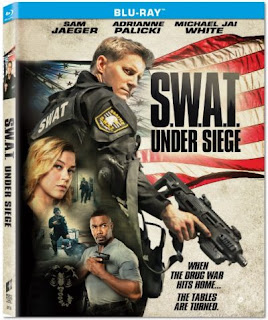 I barely remember 2003's S.W.A.T., which cashed in on viewers' nostalgic fondness for a 1975 TV show that was, save for a nifty theme song, equally unmemorable. And I had no idea an in-name-only sequel (S.W.A.T.: Firefight) was released on video in 2011.

I don't know...maybe I recently slipped into a parallel dimension where S.W.A.T. is a beloved brand name, because not only is it scheduled to return as a TV series, here's a second sequel to the movie. But if you're also new to this dimension, worry not. There's no need to go back and revisit the SWATverse because, like Firefight, S.W.A.T.: Under Siege bares no relation to the original film or TV show (not even the theme song).

Though I've always resented the time-honored practice of using misleading titles on movies that wouldn't find an audience otherwise, at least this one's subtitle is accurate (unless you're expecting Steven Seagal to show up). A Seattle S.W.A.T. team led by Travis Hall (Sam Jaeger) are ordered to raid a terrorist group's warehouse, but only find a mysterious man nicknamed "Scorpion" (you'll immediately see why). They take him back to S.W.A.T. headquarters, where Scorpion (Michael Jai White) informs them that, because of information he possesses, the terrorists will stop at nothing to get him, which includes attacking the precinct.

Sure enough, dozens of terrorists lay siege on the compound, trapping everyone inside. Gunfights and close-range fighting ensue, along with a few plot twists that reflect a bit more narrative ambition than your average direct-to-video actioner. And even though none of it is particularly memorable, the film is competently acted, its budget-conscious action and gunplay well executed. I wouldn't look for a ton of logic, though.

While it definitely behooves the viewer to check their expectations, S.W.A.T.: Under Siege works pretty well for what it is: a low budget action-fest masquerading as a sequel for those who don't know better. We've all seen them before, but this one is a decent enough time-killer that, title notwithstanding, we don't feel completely duped afterwards.