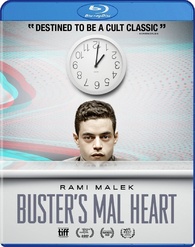 Buster (Rami Malek) is a scraggly, long-haired vagrant who survives in the Montana wilderness by squatting in unoccupied cabins, eating the owners' food, turning all the family photos upside-down and occasionally phoning talk show hosts to scream about some apocalyptic "inversion," which will apparently be triggered by Y2K. He also often finds himself adrift in a raft in the middle of the ocean, though it's never quite clear whether or not he's actually stranded.

Before all this, Buster was Jonah, a loving husband with an adorable daughter. However, life isn't turning out quite as he expected. Stuck with a job he hates - the night-shift concierge of a hotel - and living with his in-laws, Jonah is miserable and consistently exhausted. Then a stranger (DJ Qualls) arrives at the hotel one night. He has no ID and refuses to give his name, but claims to be privy to some sort of massive technological catastrophe and this knowledge makes him a target. However, he could simply be a paranoid conspiracy theorist, or perhaps just a figment of Jonah's imagination.

Throughout much of Buster's Mal Heart, the audience is uncertain what's real and what isn't, whether or not we can trust what Jonah sees, says and does. Not only that, the narrative keeps us questioning the chronology of most of these events. The only thing the audience becomes certain of is Jonah/Buster isn't playing with a full deck; there may even be something awful lurking behind those sunken eyes.

All that's left to learn is how and why he ends up adrift. The film is slow to reveal any answers, and when it does, the revelations are generally ambiguous, which is obviously writer/director Sarah Adina Smith's agenda. Like Donnie Darko, Buster's Mal Heart revels in surreal narrative and imagery, some of which is intriguing, other times ponderous. Malek, however, delivers a terrifically laconic performance that's note-perfect for the material.

The whole "what is reality" concept has been done more effectively in other films, but Buster's Mal Heart isn't without its merits. For the most part, we're intrigued enough to see it through to the end, even if our patience is occasionally tested and not every question is answered. The film may not be warrant repeated viewings (it is awfully depressing at times), but is certainly worth a few hours one evening.