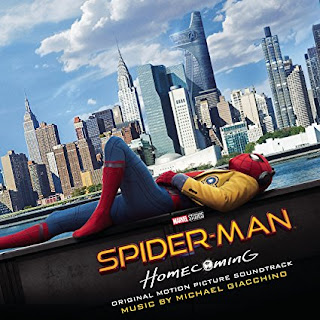 This CD starts off with a bang...the classic "Spider-Man Theme" from the 1960's cartoon TV show. Hearing it done with a full orchestra (sans lyrics), a giddy grin spread across my face. The track establishes a playful tone that the listener anticipates will be prevalent throughout the disc.

That 39 second cut is the best thing on the album. That's not a criticism of Michael Giacchino's action-filled score. He's been quite prolific lately, increasingly becoming the go-to guy for many sci-fi/action blockbusters, so he's obviously doing something right.

Not yet having seen Spider-Man: Homecoming, I couldn't tell you how effectively the music serves the film. But taken simply as a listening experience, aside from a few musical references to The Avengers, there isn't a lot to distinguish the remaining 23 tracks (including 2 'hidden' tracks) from similar superhero oriented scores.

While there are no themes as memorable as those heard in some of Giacchino's best work (in my opinion, the Star Trek reboot franchise), the music is certainly enjoyable and probably serves the film just fine, which is ultimately a composer's purpose. The joyous "Spider-Man Theme" is wonderful and it's a shame it isn't worked into the score a bit more.