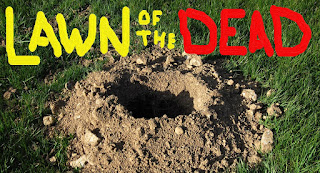 Though his eyes were still thick with sleep, Tom couldn’t help but notice the massive hole in the middle of his front yard the second he opened the garage door. He scowled, angrily retying his bathrobe. A blue Lexus hummed past, indifferent to the sudden blight on his grass.

He bitterly grabbed his trash can and dragged it to the end of the drive, staring in disgust at the unsightly hole the entire time. He’d just reseeded the entire damn yard in the spring, shortly after he and his wife bought the place. A whole weekend of labor undone by a worthless, wily rodent.

After dropping off the trash, he gingerly tip-toed across the lawn to the hole. Morning dew flitted from the grass with each step, dampening his slippers and dotting his bare ankles with tiny drops. Hands on hips, he surveyed the damage. Surrounded by a ring of unearthed soil, it resembled a recently-erupted volcano. Tom peered into the cavernous black abyss, thinking the mother of all gophers must be living beneath his property.

“Say, Tom,” a familiar voice greeted from behind. “How goes the battle?”

Tom turned to see his neighbor, Herb Blisard, jogging in-place on the sidewalk. The old man flashed a congenial smile as he removed his earphones and wiped sweat from his forehead. He was dressed in the same too-snug blue sweats and Oregon Ducks T-shirt he wore for every morning run.

“The battle?” He replied as he aimed a rigid finger at the vandalism in the middle of his yard. “That’s how the battle goes. Goddamn gophers.”

Herb stopped jogging and slowly exhaled, regarding the hole with a serious face.

Tom slowly shook his head and sighed. “Can you believe it? In a neighborhood like this? Homes starting at 400K, a Lexus in every driveway, a barbecue on every patio, in-ground sprinklers, and all it takes for my property to look like White Trash Central is a pea-brained rodent. Now I gotta run to Home Depot to get rid of the little bastards.”

As if on cue, Reggie Bannister, a neighbor from two houses down, sped by in his silver Lexus, throwing a friendly hand out the window on his way to work.

“Gophers?” Herb mused, stepping up onto the lawn to join Tom. Also putting his hands on his hips, he studied the cavernous hole for several seconds. “It ain’t gophers, Tom. Hole’s too big for gophers. Looks like you’ve got zombies.”

Tom’s eye grew huge. “Zombies? How could I have zombies?”

“Yeah, that figures. Hard to sell homes built atop dead people, but it doesn’t instill much trust in your agent, does it?”

Tom’s face sank as he stared ominously into the hole. “Zombies. This is worse than gophers.” He buried his face in his hands.

Herb slapped him on the back. “Not really, Tom. Gophers usually burrow back into the ground only to pop up somewhere else in your yard. Just one gopher can dig dozens of tiny holes. Zombies pop out once. So unless you’ve got a whole nest of ‘em under your yard, you’re actually pretty lucky.” He nodded down to the hole. “All you gotta do is find this one and get rid of it. You don’t want something like that hanging around. Lowers the property value.”

“What makes you think a zombie would stick arou-”

A sudden, ear-piercing shriek erupted from inside Tom’s home.

Herb suddenly pulled a handgun from the waistline of his too-snug sweats and charged forward. “Come on!”

Feeling helpless, Tom sprinted after his neighbor, following him into the back yard.

On the patio, gurgling and groaning as it pounded the sliding-glass door with moist, gelatinous hands, was the pasty gray corpse that had clawed its way out of Tom's front yard. Strings of yellow drool dangled from its jaws. Chunks of soil and flesh fell from its bones and plopped to the concrete with each strike of the glass. Tom’s wife, wearing the fuzzy pink robe he gave her a few Christmases ago, stood screaming on the other side of the door, hands flailing in terror.

The corpse reared its head toward Herb and Tom. Both eyes were gone; oozing black sockets stared back. Its mouth fell open as it suddenly shambled toward them, knocking over the gas grill Tom spent an hour cleaning last weekend.

Herb drew careful aim, cocked the hammer and squeezed the trigger. The blast was deafening, scaring a few sparrows from some nearby trees. The ghoul’s head exploded, spattering the nearby wall of Tom’s $400K house with blood, brains and shattered skull. The rest of the body collapsed in a wet heap.

Slowly exhaling, Herb lowered the gun and tucked it back into his sweats. “There...problem solved, buddy.”

As Nicole offered them both an exasperated look before throwing the curtains closed, Tom said, “Thanks, Herb, I appreciate it. But what if I got a bunch of the ’em under my yard?”

Herb clapped Tom’s shoulder with one hand and patted the butt of his gun with the other. “My friend, not every lawn tool can be found at Home Depot.” He looked over and noticed the nearby pond Tom had recently spent a weekend digging. “Though I do suggest getting some fencing for that thing. Goddamn racoons ate all the Koi in my pond.”
Posted by D.M. Anderson at 11:47 AM