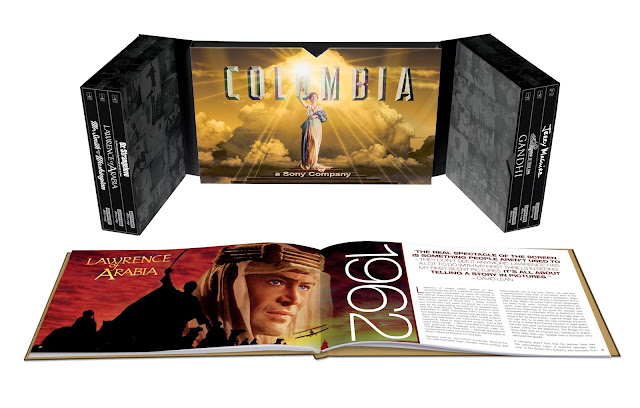 MR. SMITH GOES TO WASHINGTON ~ LAWRENCE OF ARABIA
DR. STRANGELOVE OR: HOW I LEARNED TO STOP WORRYING AND LOVE THE BOMB ~ GANDHI ~ A LEAGUE OF THEIR OWN ~ JERRY MAGUIRE

Exclusively Available on 4K Disc in this Limited-Edition Set,
Includes an 80-Page Hardbound Book on the History & Impact of the Films
and Over 30 Hours of New and Archival Special Features

Sony Pictures Home Entertainment is proud to debut six of the most acclaimed and beloved films from its library on 4K Ultra HD disc for the first time ever, exclusively within the COLUMBIA CLASSICS 4K ULTRA HD COLLECTION, available June 16. This must-own set includes iconic favorites that span the studio’s history: MR. SMITH GOES TO WASHINGTON, LAWRENCE OF ARABIA, DR. STRANGELOVE OR: HOW I LEARNED TO STOP WORRYING AND LOVE THE BOMB, GANDHI, A LEAGUE OF THEIR OWN and JERRY MAGUIRE. Each film is fully restored in 4K resolution with High Dynamic Range.


In addition, the set also includes an exclusive disc featuring excerpts from Columbia Pictures’ televised 50th anniversary special, which originally aired in 1975 and has never been officially available.  These excerpts feature rare on-camera insights from such luminaries as Frank Capra, Phil Silvers and Orson Welles. This exclusive disc also includes the vintage behind-the-scenes documentary “Mr. Attenborough and Mr. Gandhi,” which was filmed on the set of GANDHI and features interviews with cast and crew.
Posted by D.M. Anderson at 4:53 PM

That is very helpful for increasing my knowledge in this field. 4k player