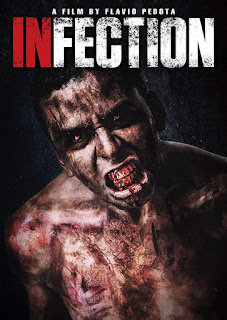 There are the slow, lumbering zombies like those unleashed by George A. Romero. You can easily outrun one or brain it with an ax, but once they number in the millions, you’re pretty much screwed.

Then you’ve got the screeching, bug-eyed sprinters like those popularized by Danny Boyle (though Dan O’Bannon did it first). What they lack in numbers is compensated by speed, agility and viciousness. So if you don’t keep that waistline trim with diet & exercise, you’re equally screwed.

Writer-director Flavio Pedota prefers the latter and Infection draws a lot of obvious inspiration from Boyle’s 28 Days Later. Like that film, his monsters aren’t zombies in the traditional sense. They’re infected with a virus which turns them rabid, ravenous and, of course, faster than Carl Lewis. As the infection rapidly spreads throughout Venezuela, widowed dad Dr. Adam Vargas (Ruben Guevara) makes a perilous trek to save his son, who’s visiting his grandparents. Meanwhile, a few other researchers - desperate to combat the epidemic - require Adam's help, though he's understandably preoccupied.

Infection wins no points for originality, but it’s well-assembled and chugs along at a brisk pace. And while there aren’t too many narrative surprises, Pedota manages to create some genuine tension with a few suspenseful set-pieces. I was especially impressed with the disturbing opening scene, where the virus appears to be started by needle-sharing junkies. Had the rest of the film maintained the same level grungy intensity, it’d be a wonderfully nerve-wracking experience.

Instead, Infection is simply a proficient sum of its influences, making the most of its budget and anchored by a sympathetic performance from Guevara. Ultimately unmemorable, it’s still entertaining enough in-the-moment for those who prefer zombies with a spring in their step.