HEROES and EDDIE MACON’S RUN: Escape from the Boob Tube 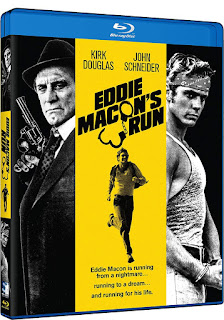 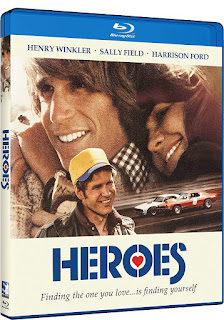 On Blu-ray for the first time, Heroes and Eddie Macon’s Run feature a couple of TV icons trying to make the time-honored jump to big screen stardom. It didn’t quite work out that way for either and both of these films have since fallen into relative obscurity. However, it’s kind-of interesting to revisit them now, ironically because of the supporting casts.

Heroes has Henry Winkler shedding his Fonzie persona to play Jack, an unstable Vietnam veteran on a cross-country trek to start a worm farm with his old war buddies. With Sally Field in-tow as the love interest he meets along the way, it’s an unassuming, seriocomic road movie that moves in fits and starts. But the real interest is Harrison Ford in a supporting role as Jack’s car-racing pal (prompting the film’s most improbable moment). Heroes was made before Star Wars but released afterwards, so Ford doesn’t have nearly as much screen time as the billing suggests. Still, it’s an amusing early performance.

Typical of the era, John Schneider was another guy who to tried to do it all back then...TV, movies and music. He does double duty in Eddie Macon’s Run, first as the title character, then warbling a couple o’ sappy country ballads for the soundtrack. Eddie’s an escaped convict trying to reunite with his wife and son while Detective Marzack (Kirk Douglas) chases him down...again (through flashbacks, we learn these two have a history together). Schneider, of course, doesn’t hold a candle to Douglas in the charisma department, which is why the film is best when the latter’s on-screen. Eddie Macon’s Run may be too episodic and silly for its own good, but Douglas is always a joy to watch (even when he’s slumming).

Then there’s the added bonus of spotting a plethora of now-familiar character actors in bit parts, such as John Goodman, J.T. Walsh, Dann Florek, Mark Margolis, Tom Noonan J.C. Quinn and Jay O. Sanders. Some are uncredited, others almost unrecognizable, but all of them manage to out-perform Schneider, who simply never had what it took to carry an entire film on his own.

Both titles are little more than Hollywood footnotes today, largely forgotten attempts to make movie stars out of two guys whose talents were better-suited for television. Still, the supporting casts make each worth checking out. After all, everyone had to start somewhere.