The Bare Necessities of ACTION OF THE TIGER 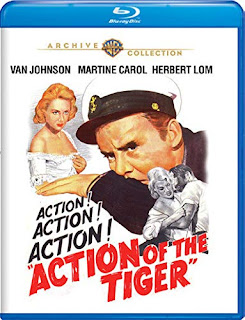 Hey! Isn’t that a young Sean Connery as a hairy, lecherous drunk trying to tear off Martine Carol’s top and have his way with her?


And isn’t that Herbert Lom, who not-only steals the entire movie as a bandit who amusingly refers to himself in the third person, but also puts his grimy paws all over Martine and won’t take no for an answer?


And speaking of Martine, are those her boobs I just saw in a major studio film...from 1957?

The answer is yes, yes and yes, which makes Action of the Tiger an interesting little curiosity. The film itself is no great shakes, but it’s kind of amusing to see Sean Connery pop up in a small role – one of his first – playing such a scumbag (though he’s a heroic sidekick!). His character is sort-of the antithesis of those which established him as a dashing leading man just a few years later.

Then there’s Herbert Lom, far-removed from his typical serious roles or playing straight-man to Peter Sellers. Here, he’s the closest thing the film has to comic relief and looks to be having a lot of fun hamming it up as Trifon, the cocky, self-proclaimed captain of his “army” who lusts after Martine.

But despite a miscast Van Johnson in the lead role, it’s French sexpot Martine Carol who commands most of our attention. She plays Tracy, who hires an American smuggler (Johnson) to take her across the Albania border in order to rescue her brother, Henri, a political prisoner. It’s not a particularly riveting journey, nor do Johnson and Carol display much chemistry together. Still, she’s statuesque and sexy, which director Terence Young exploits at every given opportunity, including a scene where she emerges from the water fully nude after a morning swim.

Some of you who recall the film might be ready to retort, “You’re wrong! Surely I’d remember seeing the lovely Ms. Carol au naturel!” And indeed you would...if you saw the version that was released in Europe. But in the fifties, breasts were known to cause blindness in American males, so Hollywood did their civic duty by replacing the scene with one where Carol wears a bathing suit. Fortunately for us, this disc features the European cut, naughty bits intact.

Without these points of interest, Action of the Tiger would be just another forgettable adventure film, a generic variation of The African Queen. Johnson’s definitely no Bogart, but you knew that already. Carol’s no Hepburn, either, but it’s easier to accept her comparatively-limited range in light of other, uh, assets. Throwing in atypical performances by Connery and Lom simply ups the curiosity factor, ultimately making the film worth checking out.