VAULT OF HORROR and a Case of Deja Vu

This essay originally appeared in the book, Strange Blood: 71 Essays on Offbeat and Underrated Vampire Movies. 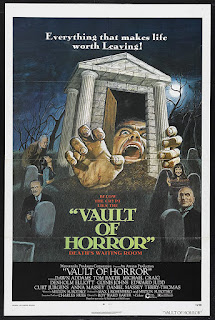 Ever since being blown away by Reservoir Dogs back in 1992, I've been a huge Quentin Tarantino fan. While he's not the world's most prolific director, I've loved nearly every film he's made, my favorite being Pulp Fiction. In my humble opinion, it is the second greatest film of all time, right behind Jaws (nothing will ever top that one, folks).

I think most fans would concur that one constant in Tarantino's entire body of work would have to be his penchant for engaging in thievery. Without getting into specifics, he's made a career out of paying homage to - and borrowing liberally from - his favorite films, directors and genres, repackaging them with hip dialogue, cool characters and obscure pop culture references. In the process, he's made a series of films that manage to appeal to cinephiles who normally wouldn't be caught dead watching an exploitation film. It's almost impossible to view any Tarantino film without experiencing a sense of deja vu. But in his defense, he's almost always given credit where it's due and worn his influences proudly.

That being said, I felt similar deja vu halfway through From Dusk 'Tll Dawn. Though directed by Robert Rodriguez, the story and screenplay is pure Tarantino, particularly the first half, with George Clooney and Quentin himself playing the Gecko brothers, two brutal bank robbers who take a family hostage on their way to the Mexican border. They're supposed to meet their contact at a remote strip club - the Titty Twister - at dawn. But in the most abrupt narrative shift in movie history, the place turns out to be a haven for vampires.

Sitting in the theater with my wife, I remember thinking this turn of events seemed awfully familiar. Not to take anything away from the movie itself; From Dusk 'Till Dawn is the best Tarantino film he didn't actually direct...smart, funny, sexy, bloody as hell and brimming with his inimitable brand of quotable dialogue. Still, I was sure I'd seen something very much like this before, a fuzzy childhood memory of a guy who wanders into a restaurant without realizing he's the main course. I remembered being scared enough to fire-up my trusty ol' night-light before going to bed, but for the life of me, I couldn't recall what movie it was, if indeed it was a movie at all.

Fast-forward a few years, when I was looking to expand my DVD collection by digging through a Wal-Mart budget bin. Even today, you can occasionally find some great stuff there, and on this particular trip, I came across an old childhood favorite, 1972's Tales from the Crypt, packaged as a double-feature with Vault of Horror, which I'd never heard of.

Tales from the Crypt is a British film from Amicus Productions. Founded by American producers Milton Subotsky and Max Rosenberg, the studio was Hammer Films' main rival during the 60s and 70s, churning out dozens of similarly-styled horror films (and keeping directors like Freddie Francis & Roy Ward Baker gainfully employed). Though they dabbled in several sci-fi and horror subgenres, Amicus' specialty was anthology films consisting of thematically-similar shorter pieces linked by a framing story and featuring a variety of well-known British actors.
The stories in both Tales from the Crypt and Vault of Horror are pulled, of course, from William M. Gaines' legendary - and controversial - horror comics of the 1950. Most of them are supernatural tales of revenge and karmic retribution, with unsavory main characters who generally get exactly what's coming to them: violent and ironic demise. As such, both movies serve up generous amounts of black humor to go along with the horror
.
Aesthetically, these two films are undoubtedly products of their time, but the stories still hold up pretty well. Watching Tales from the Crypt all these years later, what once disturbed me was now a fond, fun trip down memory lane. And as it turned out, so was Vault of Horror.
I had seen this movie before.

With the same anthology format and source material, Vault of Horror is generally considered a sequel to Tales from the Crypt (in some regions, it was even released as Tales from the Crypt II or Further Tales from the Crypt). The linking story has five strangers who enter an elevator, which descends and lets them off in what appears to be a gentlemen's club. As the doors close behind them, one man notices there's no outside button to retrieve the elevator. The only ones in the room, they settle around a table and eventually take turns sharing their recurring nightmares with the others. These dreams comprise the stories, which of course are not dreams at all, but the unpleasant ways each man met his untimely - though mostly deserved - demise.

The first and shortest story, "Midnight Mess," is also the most effective. Harold (Daniel Massey) is a greedy heir to a family fortune that he doesn't want to share with his estranged sister, Donna (Anna Massey, Daniel's real-life sibling). After killing the detective he hired to locate her, Harold heads to the village where she's living in order to kill her, too. It's a small, eerily quiet town, the streets nearly devoid of human activity. When Harold arrives and stops by a nearby restaurant, the waiter informs him they are closed, even though it's still early evening.
Harold arrives at Donna's door. After she reluctantly lets him in, Harold slams her against a wall and drives a dagger into her heart. Nefarious mission apparently accomplished, he quickly leaves. It's dark now, and the restaurant that wouldn't serve him earlier is now open and filled with customers. He ventures back over, where he is promptly seated. Without being offered a menu, the waiter brings the first course, a 'soup' which Harold finds repulsive. When the waiter asks how he would like his main course - roasted blood clots - Harold realizes the stuff in his bowl isn't soup. The other patrons all turn to stare at him. Harold nervously stands, and in the entire film's most chilling scene, notices that his is the only reflection in the dining room's wall-sized mirror. The restaurant is filled with vampires, one of which is Donna, who appears to be the ringleader. The segment ends with everyone helping themselves to his blood by tapping his jugular with a wine dispenser.

Watching the segment with more jaded eyes, I enjoyed the delicious black humor that was lost on me as a kid, too terrified at the idea of an ravenous vampire horde to concern myself with the inherent ridiculousness of the climax. I was also able to scratch an itch that had been tormenting me for a long time: So that's where I'd seen From Dusk 'Till Dawn's story before.

There are significant differences between the two films. The initial undead assault in From Dusk 'till Dawn comes out of the blue, changing the entire tone on a dime and essentially turning it into two movies: the hip Tarantino crime story, followed by Robert Rodriguez' over-the-top action and bloodletting (the film might even be seen as a precursor to the their next collaboration, Grindhouse). The "Midnight Mess" segment in Vault of Horror applies some ominous foreshadowing that something's not quite right with the setting, building a bit of anticipatory dread. But ironically, it's the Gecko Brothers who are armed and ready, while Harold is the one who's ill-prepared and caught completely off-guard. 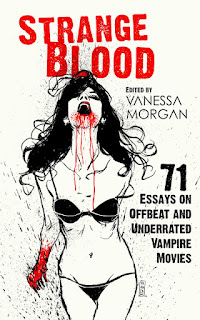 But the basic story is the same: Main characters who commit despicable acts, and just when they think they've gotten away scot-free, they stumble into an outwardly benevolent place that appears to be safe...at least until it's feeding time.

The remaining segments in Vault of Horror aren't nearly as clever or amusing, and the movie as-a-whole pales in comparison to Amicus' Tales from the Crypt. "Midnight Mess" makes it worth checking out, though, offering an amusingly twisted take on classic vampire conventions. And considering Quentin Tarantino's ongoing reverence for cinema of the 70s, perhaps it once provided a bit of inspiration.
Posted by D.M. Anderson at 9:38 AM