The Homeowner's Guide to POLTERGEIST 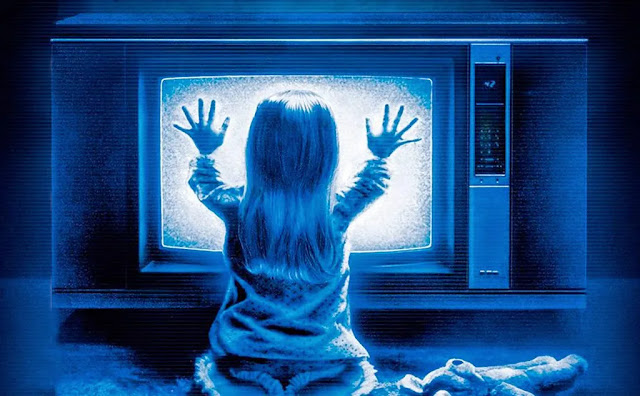 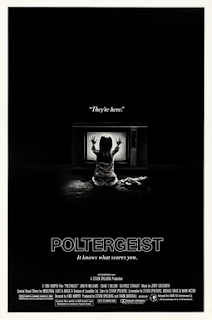 I was initially unenthusiastic about seeing Poltergeist when it was first released back in 1982. As a teenager, I had already experienced the visceral terror of Halloween & Friday the 13th, the hard-core gore of Dawn of the Dead and the slow-building dread of The Shining (though the latter never came close to being as scary as the novel it bastardized).

Nearly all horror movies were R-rated at the time, so I couldn’t imagine anything slapped with a puny PG - the same rating given to E.T. - would be anything but watered-down family fare for cowards who couldn’t handle checking out what a machete can do to the anatomy. Still, my girlfriend at the time really wanted to see it, so I dutifully drove us to the Fox theater in downtown Portland to catch a matinee.

In Poltergeist, the Freeling family lives a contented life in an upscale, planned suburban neighborhood. And I gotta say, they have a really nice house…spacious with all the modern trimmings. They’re even putting a pool in the backyard. The father, Steven (Craig T. Nelson), works for the company developing the neighborhood, while wife Diane (JoBeth Williams) looks after their three kids. Then odd things begin occurring, such as furniture moving on its own and youngest daughter Carol Anne (Heather O’Rourke) talking to the static on the TV screen.

The incidents grow increasingly malevolent, such as a tree outside the kids’ window coming to life and trying to swallow their son. Worse yet, Carol Anne is snatched away by whatever force is dwelling in the house, but they can hear her cries through the TV. Desperate, the Freelings call a team of paranormal experts, who set-up operations in the living room hoping to get the girl back. Eventually, a medium is brought in, who claims the house is filled with spirits who can’t accept being dead and refuse to cross over. The most powerful of them, the “Beast,” is keeping Carol Anne captive because of her life force…or something like that. The film culminates in a gripping, tension-filled climax that’s spectacular and surprisingly destructive.

Despite my initial misgivings, Poltergeist scared the shit out of me. Hell, it scared the shit out of everybody that summer. Those claiming otherwise were lying their asses off. As for that that PG rating? The movie showed a guy ripping his own face from his skull in lurid, lingering detail! How’d they get away with that? However, the most amazing aspect of the film was that it managed to scare the bejeezus out of an entire generation - exploiting some of our most common fears along the way - without killing a single character. One of the most terrifying movies I’d ever seen up to that point had a total body count of zero. 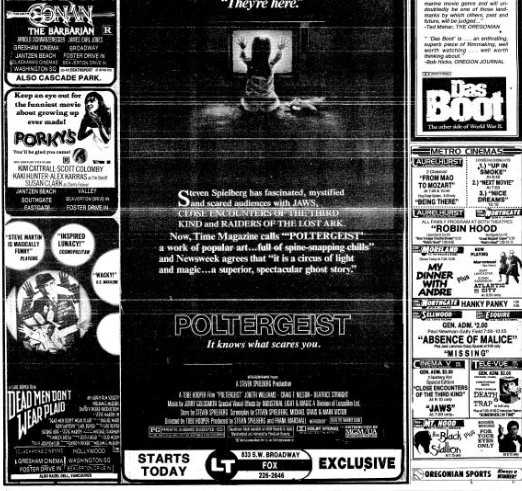 Alas, we all get older, more jaded and not so easy to spook. Though Poltergeist remains the perfect gateway drug for introducing your own kids to the wonderful world of horror, perhaps it no longer freaks you out like it once did.
However, that’s only if you revisit the film with the same mindset you had when you were younger. If you’re a homeowner, there are other aspects of Poltergeist that will terrify you all over again. If I may elaborate…

After a decade of apartment life, my wife and I were ready for a place to call our own, where we could paint the walls any color we wanted, get a pet, have our own driveway and no longer hear dysfunctional neighbors engaging in make-up sex after their latest bout of verbal combat. And we loved being new homeowners. The kids had their own rooms, I finally got the man-cave I always wanted and the only make-up sex my wife & I hear is our own.

However, there’s the part of home ownership I wasn't quite prepared for, which never crossed my mind while signing the mortgage. No longer could I simply call a manager whenever the toilet broke or the oven went tits-up. All that shit was now the responsibility of a guy whose entire tool kit consists of duct tape. That’s not the worst part. Most of our repair issues required hiring someone who actually knew the difference between a claw hammer and a plunger. Over the years, we’ve had some repair expenses so huge that I briefly considered faking my own death just so the insurance pay-out would cover them.

In that context, Poltergeist achieves an entire different level of terror. If you think a kid-snatching demon is scary, try this on for size:

The film was shot in Ventura County, so let’s also assume that’s also the setting. In today’s dollars, a home in that part of California would be worth about $915,000. Now imagine if it was your house and, like the Freelings, you were blissfully unaware it was built over a cemetery and totally haunted. You’ve already signed the escrow papers, so from here on out, any repairs and supernatural baggage are all yours…

…so when that man-eating tree breaks through your kids’ bedroom window to swallow your son, of course you'll fear for his safety. But there’s still that busted window to deal with. It looks like it’s 6’ x 4’, and when checking out prices at Lowes, the average cost for a basic no-frills replacement window is $400. Unless you know how to install it yourself, add another $150 or so for labor. Thank God your boy’s okay, but fuck.

Not quite as wallet draining would be taking care of that burn mark in the ceiling from where your wife and daughter emerge safely. Assuming you can match the color with the rest of the ceiling, a quart of paint and a roller brush should take care of it. Then again, that’s a high vaulted ceiling, and if you’re as clumsy on a ladder as I am, there's some significant personal risk.

Then there’s the total damage done to your kids’ bedroom furniture, which breaks apart as it spins around the room or gets sucked into the closet. Have you priced children’s bedroom furniture lately? Even replacing all their stuff with IKEA furniture will likely run you a couple o’ grand (and you’d have to assemble it yourself, meaning you better have more than just duct tape in your toolkit).

Speaking of their bedroom, what about the closet door, frame and surrounding wall that are destroyed when The Beast arrives? First off, a cheap door is gonna cost around $150 (not counting the knob!). A frame won’t run as much, but I sure as fuck don’t know how to put one together, meaning more labor costs. Additionally, replacing the drywall surrounding the frame is gonna be about $90 per hour for labor. Assuming the job takes a single day (8 hours), you’re looking at another $1000…not counting plaster and paint. Sure, The Beast should have to foot the bill for this, but good luck getting anything out of him. Demons are notoriously flaky when it comes to financial obligations.

The out-of-pocket expenses don’t stop at home repair, either. You think the massive holes in the lawn from all those caskets bursting out are gonna fill themselves? Landscaping will likely cost anywhere from $50 to $100 per hour, depending on how many workers are used for the task. And while they’re there, you might as well kill two birds with one stone and have them get rid of that man-eating tree before it eats someone whose family could sue you. The cost to remove a tree that large ranges from $500-$1000…probably more if it ends up eating one of the landscapers. Sure, you might be able to do all of this yourself, but yardwork of any kind really sucks and I'll bet you don’t have your own rototiller or stump remover laying around.

But let’s say all these fixes didn’t drain your kid’s college fund. Ultimately, your entire house - and everything in it - gets sucked into a vortex anyway. Trust me, your homeowner’s insurance is unlikely to cover anything like that. I checked my own policy and there’s absolutely no mention of protection from an implosion due to a supernatural portal. In the end, you’re gonna be out nearly a million dollars.

And just to rub salt in the wound…if you’re like Steve Freeling and work for the same greedy developer who built an entire planned neighborhood atop a cemetery without removing the graves, that company will probably be sued into oblivion. So not only are you homeless, you’re unemployed.Suddenly, Poltergeist is terrifying all over again. It might even be scarier today than when you first watched it because, as a homeowner, you realize there are worse things to deal with than a few angry apparitions. You’ll gasp, you’ll scream, and when the end credits roll, you’ll thank God that what happened to the Freelings hasn’t happened to you…yet.
Posted by D.M. Anderson at 8:20 PM