Does Anyone Actually Remember THE FRISCO KID? 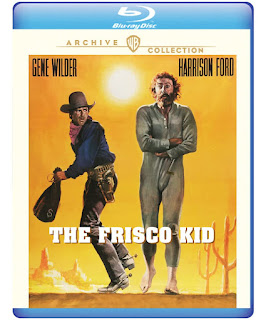 I remember being really excited to see this back in the day. Gene Wilder was in some of my favorite comedies and could do no wrong, while Star Wars suddenly made Harrison Ford one of the coolest guys in Hollywood. Surely The Frisco Kid would be awesome.

While I remember my anticipation, the film itself must not have left much of an impression because I don’t think I gave it another thought afterwards. Like its two stars, I simply moved on without ever looking back. I probably enjoyed The Frisco Kid in the moment, but it was ultimately just another movie that came & went at the Southgate Quad for a couple of weeks.

I still love some classic Gene Wilder now and then, yet have never felt compelled to revisit this one. I don’t recall ever thinking it was a bad movie, but it’s certainly no Young Frankenstein or Silver Streak. It's no See No Evil, Hear No Evil either, because at least that film was dubiously memorable by virtue of its sheer awfulness. Conversely, I forgot what The Frisco Kid was even about.

So re-watching it four decades later wasn’t exactly a trip down memory lane. In fact, it was sort-of like seeing a new movie. Those who only know Ford as HARRISON FORD might enjoy being reminded he was once simply a supporting actor, and believe it or not, his performance is arguably better than the one he gave in the original Star Wars. But other than that, there’s nothing particularly distinctive about it.

The Frisco Kid offers a standard fish-out-of-water story about naive rabbi Avram Belinski (Wilder) traveling across the Old West to San Francisco, where he’ll lead a congregation and marry a woman he’s never met. On the way, he befriends outlaw Tommy Lillard (Ford), who reluctantly ends up bailing Avram out of various predicaments. Episodically structured, it’s a story without any highs, lows, twists or turns. The performances are agreeable, the characters likable and the tone congenial, but considering the caliber of talent on both sides of the camera (director Robert Aldrich has made some incredible films in the past), everything should resonate more than it does.Instead, The Frisco Kid is watchable without ever being truly engaging, the kind of film one might have playing in the background while doing something else. At any given time, you could leave the room and return minutes later without missing out on any plot points, memorable moments or quotable dialogue, mainly because there aren’t any. Not even Wilder rises above mildly amusing, and given his history of memorably quirky characters, that might be the film’s biggest surprise of all.