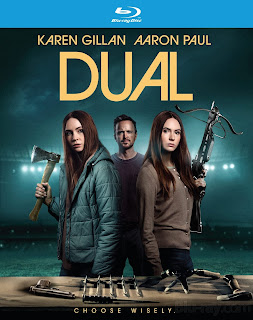 Dual could have gone a couple of directions with its premise. Whether or not writer-director Riley Sterns chose the right one is certainly debatable.

The film takes place in the not-too-distant future, where human cloning is commonplace. Karen Gillan plays Sarah, a gloomy, emotionally aloof young woman who learns she’s dying from an unspecified disease. She elects to have herself cloned to spare her mom and boyfriend, Peter, too much grief. After the process is done, Sarah’s required to bring her double up-to-speed about her life…her interests, likes & dislikes, etc.

Then Sarah receives the news that she’s not going to die after all. Since it’s illegal for both of them to exist, she wants her clone “decommissioned.” However, the law states that if the clone doesn’t want to be decommissioned, the two are required to fight to the death. Not only does Sarah’s double want to live, Peter (Beulah Koale) likes her a lot more and kicks the real Sarah out of the house. Sarah now has one year to prepare for the fight and get her life back, hiring gung-ho self-defense instructor Trent (Aaron Paul) to train her.

A more pragmatic narrative approach would be to focus on violent sci-fi action, which would make a decent film in its own right. But Sterns chooses the road less traveled, creating a comparatively understated dark comedy that serves-up Sarah’s messy life and relationships, as well as a few moral dilemmas she faces along the way. The results may not be as rousing as watching two Karen Gillans throw down, but the film presents some interesting situations and ideas.

Gillan is good in both roles, instilling each Sarah with distinctive personalities. Elsewhere, Paul’s oddball intensity is quite amusing, as are the training sequences with these two. But while Dual is frequently funny, it’s primarily a character transformation with dark undertones. Still, I suspect those seeking high-tech, fast-paced thrills will be disappointed, especially with the unconventional climax. But what it lacks in spectacle is compensated by an interesting premise, some narrative surprises and the inherent ethical questions raised by such a scenario.

FEATURETTE - “The Making of Dual.”