THE ADVENTURES OF DON JUAN and the Creepshow Lady 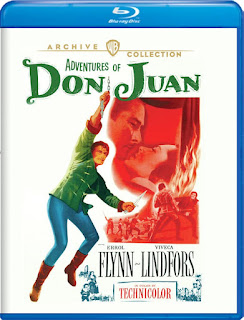 I’m speaking of Viveca Lindfors, who played “dotty old Aunt Bedelia” in 1982’s Creepshow. She was only in the film for about 10 minutes, but it was a pivotal role. Playing a crazy, guilt-ridden old woman who’s killed by the resurrected corpse of her abusive father - whom she murdered years earlier - she left a hell of an impression.

What I didn’t know at the time was Lindfors had an extensive career dating back to the ‘40s. But as much as I love classic-era Hollywood today, I somehow managed to miss-out on every old film she starred in until now. For the longest time, she was simply the Creepshow lady, even when I’d spot her in stuff like The Exorcist III and Law & Order episodes.

So I was totally taken-back by her beauty in The Adventures of Don Juan. Sure, everyone was young once, but…wow! Playing the assertive Queen of Spain, not much is required for the role…simply look gorgeous and try to mask her growing affection for the title character. But to her credit, she nails both. In fact, Lindfors does a remarkable job looking outwardly put-off by Don Juan’s reputation and behavior, yet revealing just enough through her eyes and mouth that tells the audience otherwise. There's actually a lot of sexual tension in those expressions.

One thing that’s absolutely no surprise is the casting of Errol Flynn. I’d be surprised if anyone else was even considered. Who better to take the role of the world’s most famous womanizing swordsman? Since he’s already skilled at both, no method acting is required. Hell, Flynn doesn’t even bother with a Spanish accent. Why would he? Considering his own reputation and behavior, he’s arguably just playing a version of himself. Though certainly beginning to show signs of hard living, Flynn nails his role, too. He’s charming, funny and phenomenal with a sword.

Robert Douglas, playing the conniving, treasonous Duke de Lorca, makes an excellent villain, while Alan Hale is amusing as Don Juan’s beleaguered sidekick, Leporello. Elsewhere, the film tells a fast, breezy story of Don being appointed as a fencing instructor by Queen Margaret to atone for his scandalous behavior abroad. However, he finds himself in the middle of an attempted coup by de Lorca, who wants to vanquish the Queen and establish Spain as a military power.

But the story ultimately takes a backseat to the characters, action and dialogue, the last of which is often quite funny (and occasionally suggestive). Bolstered by impressive, colorful cinematography and handsome production design, The Adventures of Don Juan is a fun film featuring Flynn in his comfort zone, where he was always the most enjoyable. It also offers a great opportunity to check out that crazy old Creepshow lady at her most beautiful.