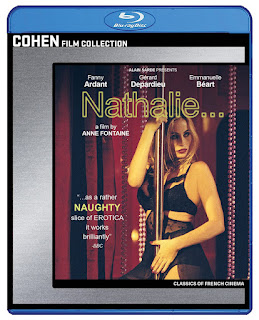 I’ll be upfront and confess that the primary personal appeal of checking-out Natalie… was the presence of Emmanuelle Béart. I’ll be equally honest and admit I haven’t actually seen her in a ton of stuff. There’s Mission: Impossible, of course, as well as some stand-out French films like La Belle Noiseuse and A Heart in Winter. Still, in the few things I’ve seen, Béart exudes a sultry confidence that’s compelling and - being honest again - pretty damn sexy.

She’s good as the title “character” in Nathalie…, not to mention easy on the eyes. But this time, her role really could have been played by anybody. And the film itself is not quite the steamy slice of French erotica suggested by its synopsis and alluring ad campaign. French nuerotica is more like it.

The main protagonist is actually Catherine (Fanny Ardant), a middle aged gynecologist who discovers her husband, Bernard (Gérard Depardieu), has cheated on her, which he dismisses as a one-time fling. Since their marriage hasn’t been a bed of roses lately, she doesn’t appear too surprised or even all that hurt. In fact, Catherine seems more curious about what actually turns him on, so she hires high-end prostitute Marlene (Béart) to pose as a woman named Nathalie, instigate a chance meeting and coerce him into an extramarital affair.

Still, the story is sporadically interesting, with Catherine’s perplexing actions and decisions being the driving force behind the narrative. Ardant is excellent in the role, as well, conveying both assertiveness and uncertainty. One the other hand, Marlene/Nathalie oozes sexuality - of the emotionally detached variety - but is a comparatively static character. The same could be said about Bernard. Despite being the catalyst, he isn’t in the film all that much and his conspicuous absence through most key sequences tends to undermine the climax’s twist ending.

Though Nathalie… grows a little repetitive after a while, we’re somewhat compelled by Catherine’s plight. Her actions aren’t likely to be anything we would do in a similar scenario and the film isn’t completely successful in justifying her motivations, but she’s sympathetic enough that we hope it works out for her.