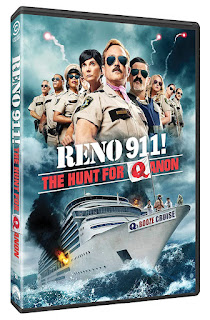 What made the original Reno 911! so damn funny was it had just the right balance of satire - skewering popular reality shows like Cops - and oddball characters, each with their own distinctive personalities. With hindsight, one could argue that such later ensemble comedies as Parks and Recreation wouldn’t exist without it.

The show has been resurrected a few times over the years. I haven’t seen any of the recent versions, so I couldn’t tell you if it stayed conceptually true to the original series. But like 2007’s Reno 911!: Miami, this second film is a mixed bag, mainly because the very nature of reality TV isn't really conducive to feature-length treatment in the first place, to say nothing of spoofs of the genre.

Sometimes Reno 911: The Hunt for Qanon is very funny, particularly the subtler moments with throwaway lines so clever you might miss them, as well as some timely commentary on what it’s like being a cop these days. And true to the title, the crazy Q cult also gets some well-deserved ribbing (though poking fun at them is kinda like shooting fish in a barrel).

But just as often, there are long stretches where the film abandons its own “reality” format altogether in favor of the actual story (the squad going undercover on-board a cruise ship). There are also hints of desperation, such as the station briefing scene where several characters are shown doing drugs without context, as if the sight of  Lt. Dangle (Thomas Lennon) taking bong hits is inherently funny. Then there’s the moment when the cast breaks into a full-blown rendition of “Caribbean Queen” for no discernible reason. It’s simply an musical sequence bereft of any narrative purpose. Hell, there ain’t even a punchline.

Still, the entire cast is back and some of their situations are highly amusing, such as Deputy Wiegel’s “encounters” with a suave male passenger, or Dingle’s marathon audition to be the ship’s entertainment. Frequent Reno 911! guest star Patton Oswalt also returns in a funny role as a high ranking Qanon member. A few other famous faces pop up in cameos, such as RuPaul and Pink.

Reno 911: The Hunt for Qanon is never as clever or consistent as the original show, and since the last attempt to pad the concept to feature-length wasn’t either, maybe that’s to be expected. But with tempered expectations, there are (probably) just enough funny bits to make this worthwhile for longtime fans. Others need not apply.