THE SACRED SPIRIT: "What the Hell!" 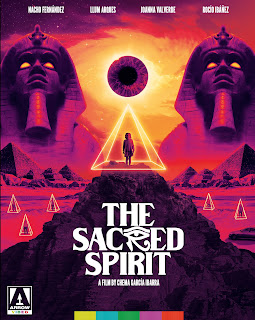 I thought that more than once during The Sacred Spirit. Not that it’s confusing, visually shocking or excessively weird (though it does get weird, at times), but because it lulls the viewer into a feeling of complacency before pulling the rug out from under them.

Initially, there appears to be two stories happening concurrently. The first is a girl who’s gone missing. Her mother, Charo, struggles to deal with her daily routine - trying to care for the girl’s twin sister, Veronica, and keep working while waiting for news from the police. The second is an oddball group of ufologists called ONVI Levante, whose leader, Julio, suddenly dies. One member, cafe owner Jose, tries to go through with the plans they made, apparently anticipating alien contact. Since he’s the missing girl’s uncle, Jose is the connecting thread between the two stories and the film’s primary protagonist. A majority of the narrative sees him meeting with fellow ONVI members, preparing for an alien arrival and eventually watching over Veronica while Charo is urgently called away.

Up to this point, the movie is meandering, almost dull. The characters are quirky, but decidedly expressionless. Whether that’s due to the amateurism of its actors - none have really appeared in anything else - or Chema Garcia Ibarra’s direction could be debated. Considering numerous long stretches where characters are simply sitting or walking, I think it’s a deliberate attempt to manipulate the audience into letting their guard down before throwing-in the first “what the hell!” moment, which not only changes our perception of Jose, it alters our entire view of the narrative.

The film continues at the same lethargic pace, but now a sense of dread seeps into the proceedings and every subsequent scene has much darker underpinnings. And with hindsight, we realize clues to the story’s direction were peppered throughout the first deceptively mundane act (including recurring eye-related imagery and TV broadcasts in the background). What began as an eccentric little indie excursion has - with only a few key scenes - become something more sinister and grounded in reality than we expected, culminating in a disturbing denouement that certainly sticks with the viewer…whether they want it to or not.

Some will be tempted to quit the film entirely before even reaching those “what the hell!” scenes, others may find themselves ready to stop because of them. The Sacred Spirit certainly isn’t for everybody. but patient and adventurous viewers might find this Spanish oddity pretty rewarding. In addition to a good video & audio transfer, Arrow Video features an interesting - sometimes unusual - batch of bonus features, including an entire second disc of early short films directed by Chema Garcia Ibarra, some of which will prompt a similar “what the hell!” reaction.

2 VIDEO ESSAYS - 1) “Beyond the Eye of Horus,” by Alexandra Heller Nicholas; 2) “Pyramid Scheme,” by Josh Nelson. I’d watch the movie before either of these.

4 BEHIND-THE-SCENES FEATURETTES - Running about 2 minutes each.

ELCHE VISION - Short pieces about the film, “reported” by Esther Armengol (the reporter in the movie, played by Lorena Iglesias.

CHARACTER INTERVIEWS - 9 of the characters discuss themselves for a few seconds each.

UNCUT TV CLIPS - The broadcasts in the background are a major part of the story. A few are presented here uninterrupted.