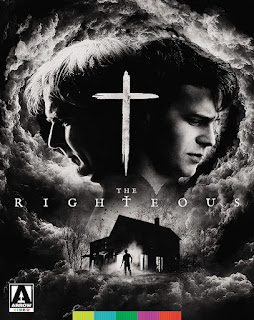 “Hey, it’s that guy! You know, what’s his name…from that one movie…”

A lot of us may not be familiar with his name - much less pronounce it properly - but there’s no mistaking Henry Czerny. He’s been in a ton of stuff over the years, usually in supporting roles playing bad guys, or at least someone intimidating and unlikable. As character actors go, he’s one of my favorites.

So The Righteous is sort of a revelation. Czerny’s not only the primary protagonist, he conveys uncharacteristic vulnerability and uncertainty as Frederic Mason, an ex-priest grieving the sudden death of Joanie, the girl he and wife Ethel had adopted. While it’s not made immediately clear what happened to her - it’s a major plot reveal later on - Frederic prays to God for penance.

That penance arrives in the form of Aaron (Mark O’Brien, who also wrote & directed), a young stranger who shows up in the middle of the night with an injury. They initially offer shelter for one night, but he endears himself to Ethel, so he ends up staying. However, Aaron’s arrival isn’t a chance encounter. During one of many revealing one-on-ones, Aaron asks Frederic to kill him. If Frederic refuses, he’ll take Ethel away from him.

Until this point, The Righteous takes its time establishing the three leads - plus Doris (Kate Corbett), Joanie’s troubled biological mother - and setting a somber tone with striking black & white cinematography. This allows the narrative to subtly slip into horror territory during the second half, with some stunning plot turns that explain Aaron’s presence and Frederic’s need for penance (whether or not he’s truly ready for it).

To explain further would be to spoil some dark surprises, but even if The Righteous is slow burning and never particularly scary - not to mention some biblical interpretations that are a tad too literal - the haunting denouement is worth our patience. Best of all is Czerny’s performance. Though Frederic Mason is a far cry from the pricks and authority figures he usually plays, he earns our trust and sympathy…for a while, anyway.

ORIGINAL SOUNDTRACK - An hour of music from the film, with accompanying stills.

REVERSIBLE COVER - Both are pretty striking.